Atmospheric C02 Levels Surpass 400ppm “Game Over” Mark: Watch How It Can Be Reversed Fast

Atmospheric concentrations of carbon dioxide surpassed a tragic milestone this week.  Huffington Post reports: “They reached a daily average above 400 parts per million, reported NOAA, for the first time in human history.  The milestone, hit on May 9, may be symbolic, notes Climate Central, but manmade CO2 emissions from the burning of fossil fuels continue to rise, bringing greater atmospheric warming and exacerbating the effects of climate change.  Scientists argue we’ve loaded the “climate dice” in favor of more weather anomalies and extreme heat waves.  Research also shows that continued emissions of long-lived greenhouse gases like carbon dioxide will mean ‘largely irreversible’ climate change for 1,000 years even after we curtail emissions. ‘The last time we’re confident that CO2 was sustained at these levels is more than 10 million years ago, during the middle of the Miocene period,’ climate scientist Michael Mann told The Huffington Post in an email. ‘This was a time when global temperatures were substantially warmer than today, and there was very little ice around anywhere on the planet.'”

400ppm levels have been recorded in polar zones such as Antarctica in years past, but this is the first time this “game over” level has been recorded in the Earth’s mid-section.  Our use of fossil fuels — and thereby our carbon emissions — is accelerating, and the transition to clean energy is still far beyond reach for most of the world.  Therefore much attention has been focused recently on CO2 “absorption” rather than CO2 “emission”.  Is there a way to turn the planet into a CO2 vacuum cleaner and get it out of our atmosphere?  Thankfully there is, it’s already being implemented around the world, and the results are mindblowing.

In early March 2013 the organizers of TED Talks hosted what many are calling the most important TED Talk of all time.  And I couldn’t agree more.  The guest speaker was Dr. Allan Savory, a biologist who presented his life’s work on desertification reversal.  Savory has devoted his life to proving that our traditional and unnatural methods of livestock handling have turned much of our planet into a desert which is unable to absorb any carbon out of the atmosphere.  After decades of exhaustive research and field tests, Savory has devised a new way of livestock management which in effect “mimics” mother nature and uses the movement of livestock herds in such a way as to reactivate and reclaim desertified lands and turn them into enormous planetary carbon pumps.  This is one of the most extraordinary TED Talks I have ever seen and proves that the answer to reversing climate change has been right beneath our eyes and our feet for a century.  Experts have looked at Savory’s results and predict if his simple methods were implemented worldwide we could turn back our carbon-filled atmosphere to the pre-Industrialization levels of the late 1800s.

For more information on Dr. Allan Savory be sure to visit SavoryInstitute.com.  Dr. Allan Redin Savory (born September 15, 1935) is a Zimbabwean biologist, farmer, soldier, exile, environmentalist, and winner of the 2003 Banksia International Award and the 2010 Buckminster Fuller Challenge.  He is the originator of holistic management. 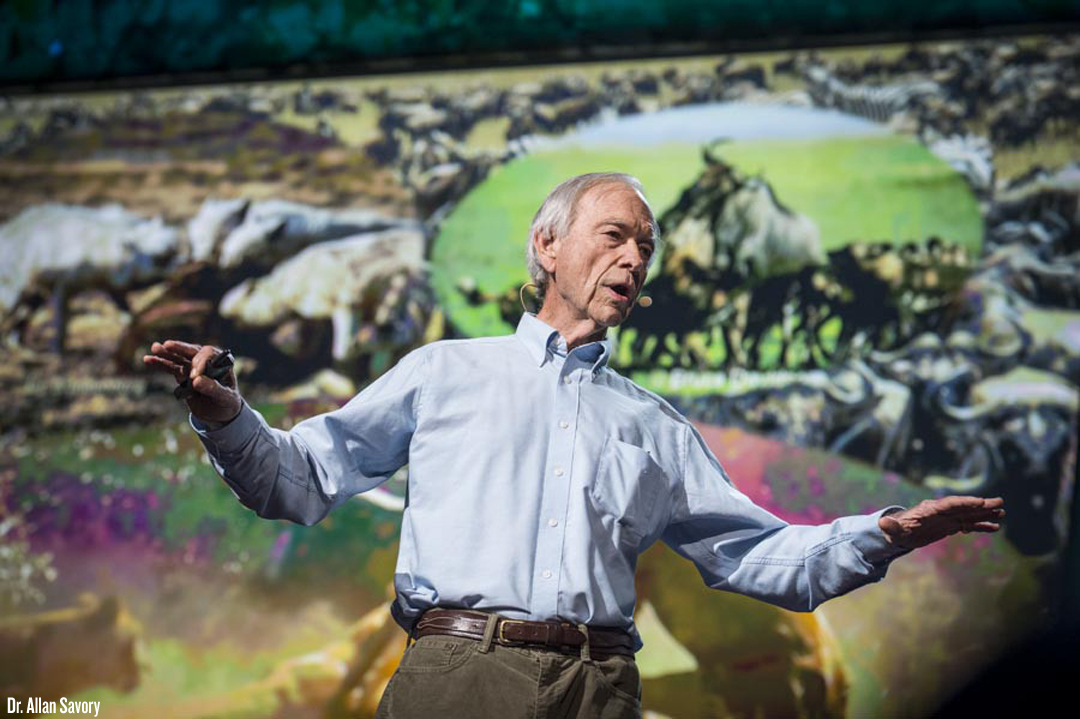 Previous post:
Skateboarder Zips Through L.A. And Straight Into Your Heart In Video For “Pyrakantha” by Balmorhea Next Post:
Dark & Twisted British Indie Comedy “Sightseers” Hailed As One Of The Best Damn Films Of 2013