Jessica Chastain (born March 29, 1981) has exploded onto the Hollywood scene unlike any other actor I have ever witnessed in my life.  Having worked in film for a decade now, I’ve become used to getting a sneak peek at who is being groomed for stardom long before anyone would ever recognize them on the street.  The actor gets a strong role, does great work, gets some even stronger buzz in the casting circle, then before you know it they’ve got two or three movies coming out at the same time and POW — they’re as star.  But Jessica Chastain has taken this “star incubation” process to an entirely whole new level.  The Juilliard School alumni first captivated the world with her performance of Mrs. O’Brien, opposite Brad Pitt’s Mr. O’Brien, in the mindblowingness that is The Tree Of Life. Then she was cast as a younger version of Helen Mirren in the espionage thriller The Debt. And most recently I saw her pop up in the trailer for the upcoming film Take Shelter, playing the torn wife of a man suffering from paranoid delusions.  Chastain is on fire right now — and this is just the beginning of what promises to be a very long career for one of the most sought-after actresses in the business.  WONDERLAND magazine recently sat down with her to discuss her performance in the Al Pacino-directed Wilde Salome which premiered yesterday at the Venice Film Festival.  From all critical accounts, Chastain stole the show in a major way with her portrayal of the titular character (‘The Playlist’ was at the premiere and describes her performance as “jaw-dropping”.  You can read the full review by CLICKING HERE). WONDERLAND recently sat down with Jessica to uncover the top five things we didn’t know about her:

1. SHE’S A THEATRE GEEK: “I’m the girl that goes to the theatre by herself or with friends. I was always the freckly, redheaded theatre nerd… I’ve never been the cool kid. I got teased mercilessly in elementary school and once I found my group of theatre friends I realized I do fit in somewhere.”

2. SHE LIKES HANGING OUT IN THE KITCHEN: “I love long-term cooking, the type that takes all day where you really smell it in the house, like roasting pears.”

3. SHE PLAYS THE UKELELE: I used to play guitar and I realized when I started working and traveling so much that I wasn’t able to play anymore because I felt stupid carrying around a guitar case. With the Ukelele I could just stick it in my suitcase and play it in the hotel room.

4. SHE NEVER WANTED TO BE FAMOUS: “I’ve always been the student, learning about being an actor, and becoming a better actor, so for me it’s about working with the masters of it. It’s not been about ‘This is the film where I’ll get famous.’ I’ve never thought like that.”

5. SHE’S A SCRABBLE CHAMP: “I’m so obsessed that during [the filming of] The Wettest Country in the World Tom Hardy and I would play two games at once on our iPads. Of course I always beat him, though he would deny that.”

You can read the entire interview in the September issue of WONDERLAND. You can also follow WONDERLAND on Facebook.  Check out the following HITFIX interview with Chastain where she walks the interviewer through her recent successful explosion of films.  And if you haven’t seen the trailer for her upcoming film Take Shelter, be sure to watch it below as well. 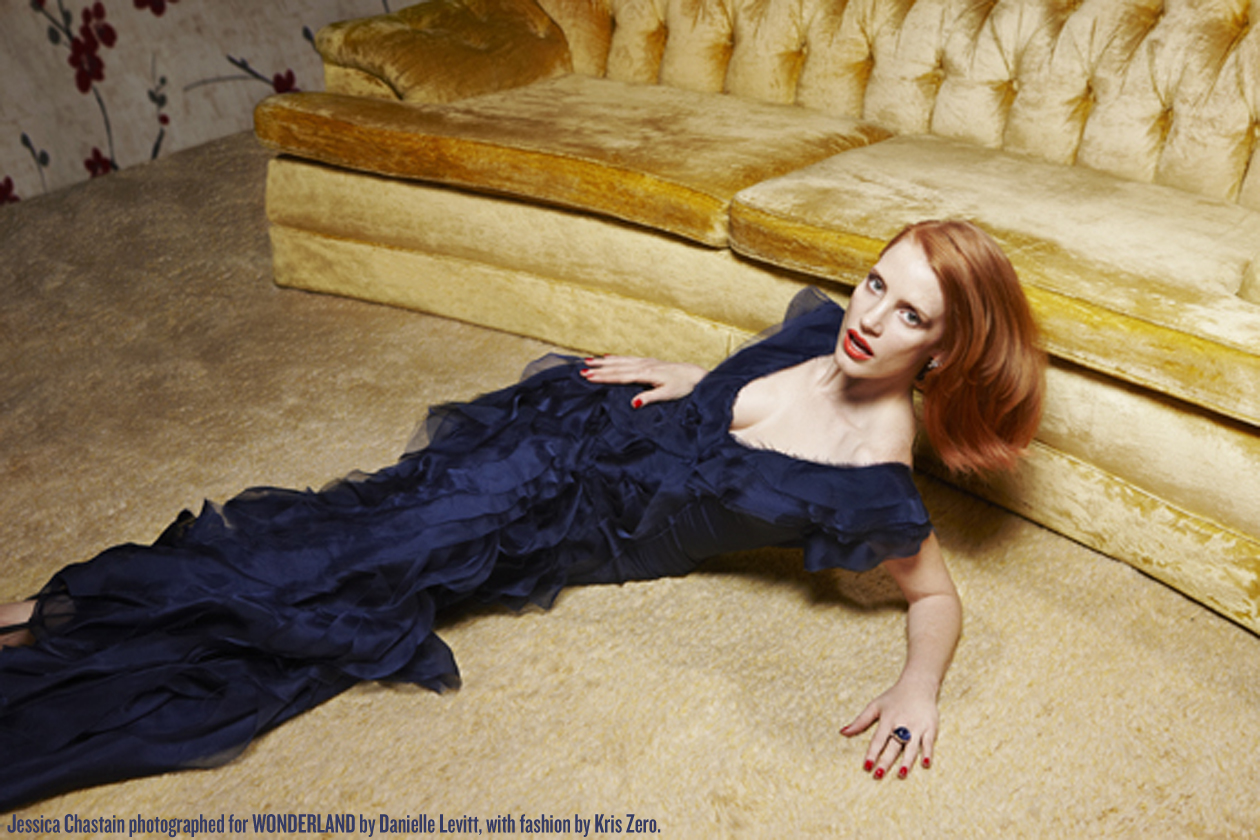 Previous post:
Now You Can Listen To Neon Indian’s New Album “Era Extraña” In Its Entirety For Free On NPR’s Website Next Post:
Watch Kurt Vonnegut Explain On A Chalkboard The Three Principle Shapes Of Story Lines