Christopher Hitchens On “Elite” Cancer, Dictatorship, And Why Being Boring Is Unforgivable

I just found this amazing new interview that Christopher Hitchens gave to 60 Minutes which aired yesteray, and it’s really one of the best features of him that I’ve seen in quite a while.  I consume everything of Christopher’s that I possibly can, so everytime I find something new I can’t wait to share it.  Here’s what the Guardian had to say about the interview:

Christopher Hitchens has survived the latest intervention in his ongoing treatment for cancer, an examination by CBS’s Steve Kroft on 60 Minutes, with the author joking that the severity of his illness has made him a “member of a cancer elite” who finds himself “looking down on people with lesser cancers”. The profile, filmed over a period of months following Hitchens’s diagnosis with oesophogeal cancer in June 2010, furnishes an admiring overview of the great controversialist’s life, as well as a fascinating portrait of the incomprehension and affection which result on both sides when mainstream America encounters the maverick Englishman. Described by Kroft as a “provocateur” who consumes “staggering amounts of alcohol”, Hitchens proceeds to gently run rings around his interviewer, wryly observing that his 5% chances of survival are “not the odds [he] would have picked”, demanding more precision in Kroft’s suggestion that the polemicist has sometimes gone “over the top”, and then correcting Kroft’s quotations from his demolition of Mother Theresa. Hitchens admits that the diagnosis left him “petrified with fear”, because he worried that it might stop him writing, which would diminish his “will to live. Being a writer is what I am, rather than what I do,” he says. Kroft despairs of summing up Hitchens’s literary output, and seems astonished at Hitchens’s library, averring that the writer has “read all of [his books] from cover to cover, and can still quote lengthy passages”. Hitchens meanwhile revels in his bad-boy reputation, affirming that he wrote about a tasteless joke concerning Princess Diana, despite Kroft’s surprise that “it was printed”, suggesting that he was “notorious” at Oxford instead of merely “infamous”, and agreeing with Kroft’s assessment of his career as proceeding by “picking on bigger and bigger targets. In a way, of course it has to end with the belief in the divine,” says Hitchens, “because that is the origin of all dictatorship.” The latest footage, filmed in February, shows a bearded Hitchens speaking with a little more rasp in his voice, but still with the same sharp wit. According to Kroft, the author nearly died in January, and is taking a “cutting-edge drug” in an “experimental programme” which is “showing some promise”. Hitchens, who says he hates it when people ask about the expiry date on his credit card, remains undaunted. “I make preparations both to live and to die every day,” he says, “but with the emphasis on not dying, and on acting as if I was going to carry on living.”

You can watch the interview below (if the video ever gets pulled down you can always jump over to 60 Minutes at CBS). SEE ALSO: Christopher Hitchens Destroys Mel Gibson (And John Galliano) In Brilliant UCLA Lecture 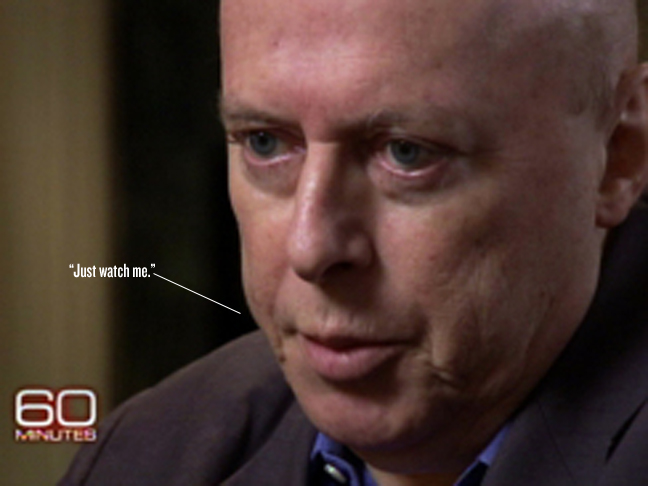