In light of John Galliano’s senseless anti-semitic remarks last week at a Paris cafe, I was reminded of a recent lecture given by Christopher Hitchens at UCLA where he was invited by the family of reporter Daniel Pearl (who was kidnapped and murdered by Al-Qaeda in 2002) to speak in honor of Pearl’s life.

Hitchens prefaces his lecture by showing a 3-minute clip from a local L.A. morning cable entertainment news show featuring an interview between a reporter and Mel Gibson at a press junket for Gibson’s movie.  Hitchens proceeds to brilliantly tear down Gibson and prove to the audience that Gibson is nothing more than a madman.  Everytime I listen to Hitchens speak I can’t help but think to myself, “What I wouldn’t give to be able to speak with such power, eloquence, and meaning.” Hitchens has a way of pulling the wool off our eyes and giving us such amazing insight into things that we encounter everyday but often give too little thought to: religion, politics, popular culture, literature, sociology, philosophy, anti-semitism, homophobia, etc.  Christopher Hitchens is perhaps the single strongest moralistic, intellectual, and philosophical influence in my life right now; my appetite for his “Hitchslaps” as they’ve come to be known shows zero signs of abiding.  I hope you keep on slappin’ for many years to come Chris!

NOTE: In Video #1 the 3-minute L.A. cable show clip begins at the 4:48 mark, followed by Hitchens’ remarks immediately after at the 8:00 mark. Video #2 is another clip from the same speech which warns about the dangers of anti-semitism. Video #3 is the Q&A session following the lecture.

And in case you were interested, here’s Hitchens’ thoughts on Gibson’s film The Passion Of The Christ: 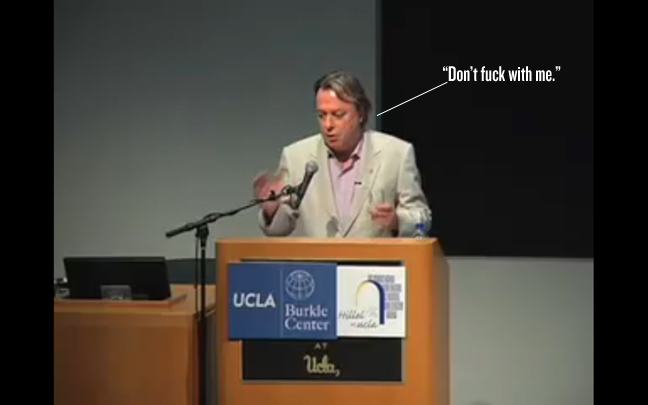