Chris Pine (born August 26, 1980 in Los Angeles) to actors Robert Pine and Gwynne Glifford. His maternal grandparents were Hollywood actress Anne Gywnne and Hollywood attorney Max M. Gliford. He has a sister named Katie. He grew up in the San Fernando Valley, and attended the University of California in Berkeley where he majored in English.

Pine attended Oakwood School for high school and received a bachelor’s degree in English from the University of California, Berkeley in 2002. He also studied English at the University of Leeds in England for one year. After graduation, he studied at the American Conservatory Theater in San Francisco.  After guest starring roles on the TV series’ CSI: Miami, The Guardian, and ER, Chris Pine moved on to feature films. Pine caught the attention of the ladies in the audience with the lead role of Lord Nicholas Devereaux in Princess Diaries 2 opposite Anne Hathaway.  Pine took on one of the leads in the independent film Bottle Shock co-starring Alan Rickman in 2008. He also entered the world of huge budgets and even bigger special effects with his starring role as the young James T Kirk in JJ Abrams’ Star Trek (2009).  Chris just finished shooting the McG-helmed This Means War.

Chris Pine also landed the recurring role of ‘Chris Pine’, where he plays my life partner in a villa in the south of France.  Entitled “Chris And Brent: The Greatest Story Ever Told”, this film is currently playing inside my head mostly at night time.  Check him out on the November cover of DETAILS. 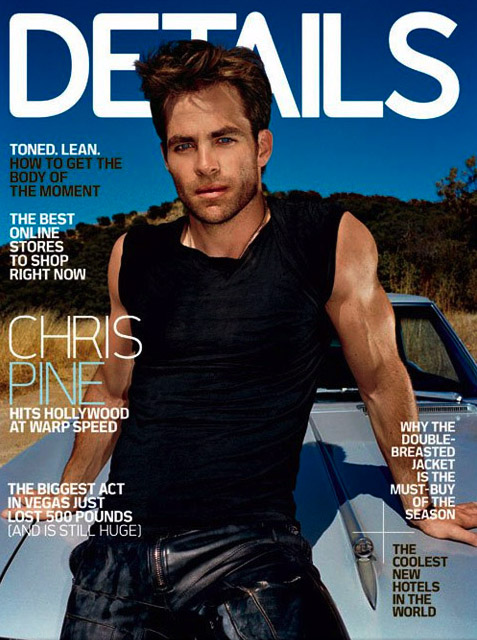