Andrew Russell Garfield (born 20 August 1983) is an American-British actor who has appeared in radio, theatre, film, and television. He is known for his roles in the 2007 films Lions for Lambs and Boy A, The Imaginarium of Doctor Parnassus, and the David Fincher drama The Social Network. He will play Peter Parker/Spider-Man in the franchise’s 2012 reboot.

Garfield started taking acting classes in Guildford when he was fifteen, and appeared in a youth theater production of Bugsy Malone. He also joined a small youth theater workshop group in Epsom, and began working primarily as a stage actor. In 2004, he won a MEN Theatre Award for his performance in Kes at Manchester’s Royal Exchange Theatre (where he also played Romeo the year after), and won the outstanding newcomer award at the Evening Standard Theatre Awards 2006.  In October 2007, he was named one of Variety’s “10 Actors to Watch”.

Ever since seeing The Social Network, Andrew’s been on my mind quite a bit.  I won’t give away any of the plot, but Andrew’s character goes through…ummm…a lot.  I think he’s fascinating for a couple reasons: 1) His skill as an actor is unmatched, and 2) He’s an unconventional antihero–which is always the best kind. 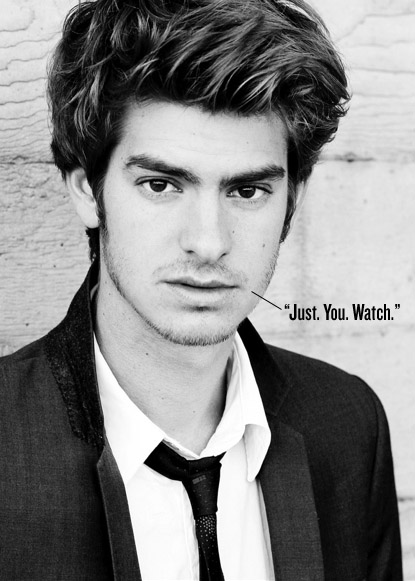