HALLOWEENguide: The Origins Of Halloween

Halloween originated thousands of years ago, making it one of the oldest holidays. The Halloween that we celebrate today has had many influences from many cultures over the years, such as the Roman’s Pomona Day, Celtic festival of Samhain, and the Christian holidays of All Saints and All Souls Days.  Hundreds of years ago the Celts lived in what we now call Great Britain and Northern France. They worshiped nature and had many gods, the sun god being their favorite. This was the god that dictated their work and their rest schedules. He was also known for making the earth beautiful and the crops grow plentiful .

Celtic New Year was on November 1st.  Every year the Celts celebrated with a festival marking the end of summer (the season of the sun) and the beginning of winter (the season of darkness and cold).  On October 31 once all the crops were harvested and stored away for the long winter, they would extinguish the cooking fires in the homes. The Celtic priests, also called Druids, would gather in the dark oak forest (oak trees were considered sacred) upon the hilltop. Here they would make new fires and offer sacrifices consisting of crops and animals. They would then begin to dance around the fires. It was at this ceremony the season of the sun would pass and the season of darkness would begin.  In the morning the Druids took an ember from their fires and gave it to each of the families. They would take the ember home and start new cooking fires. These fires would keep the homes warm and free from evil spirits, until the season of sun returned.

November 1st was the festival called Samhain (pronounced “sow-en”). This festival lasted for 3 days. People would parade around in costumes made from the skins and heads of animals. It was this festival that became the first Halloween.  During the first century that the Romans invaded Britain, they brought many of their festivals and customs with them. One of these was Pomona Day, named for their goddess of fruits and gardens. This festival was also celebrated around November 1.  After hundreds of years of Romans, the Celtic’s Samhain festival became mixed with the Roman’s Pomona Day creating one major fall holiday.

The next influence came around when the new Christian religion spread throughout Europe and Britain. In the year 835 AD the Roman Catholic Church made November 1 a church holiday honoring all the saints. This day was called All Saint’s Day, Hallowmas, or All Hallows. Years later, the church called November 2 “All Souls Day” to honor the dead.  It was celebrated with big bonfires, parades, and people dressing up as saints, angels and devils.  The spread of Christianity did not make people forget their customs. People continued to celebrate the festivals of Samhain and Pomona Day on October 31. Over the years all customs from these holidays mixed. October 31 was All Hallow Even, later All Hallow’s Eve, Hallowe’en and then Halloween, as we know it today.  Halloween as we know it, includes all of these influences, Pomona Day’s apples, nuts, and harvest, the Festival of Samhain’s black cats, magic, evil spirits and death, All Saint’s Day and All Soul’s Day, ghosts, skeletons and skulls.

The Jack O’Lantern is an interesting story in its own right, and its beginnings are completely separate from those of Halloween.  Mixed with fact and folklore, the Jack O’Lantern legend goes back hundreds of years in Irish history.  As the story goes, “Stingy Jack” was a miserable, old drunk who liked to play tricks on everyone: family, friends, his mother and even the Devil himself. One day, he tricked the Devil into climbing up an apple tree.  Once the Devil climbed up the apple tree, Stingy Jack hurriedly placed crosses around the trunk of the tree. The Devil was then unable to get down the tree. Stingy Jack made the Devil promise him not to take his soul when he died. Once the devil promised not to take his soul, Stingy Jack removed the crosses and let the Devil down.

Many years later, when Jack finally died, he went to the pearly gates of Heaven and was told by Saint Peter that he was too mean and too cruel, and had led a miserable and worthless life on earth. He was not allowed to enter heaven. He then went down to Hell and the Devil. The Devil kept his promise and would not allow him to enter Hell. Now Jack was scared and had nowhere to go but to wander about forever in the darkness between heaven and hell. He asked the Devil how he could leave as there was no light. The Devil tossed him an ember from the flames of Hell to help him light his way. Jack placed the ember in a hollowed out Turnip, one of his favorite foods which he always carried around with him whenever he could steal one. From that day onward, Stingy Jack roamed the earth without a resting place, lighting his way as he went with his “Jack O’Lantern”.

On all Hallow’s eve, the Irish hollowed out Turnips, rutabagas, gourds, potatoes and beets. They placed a light in them to ward off evil spirits and keep Stingy Jack away. These were the original Jack O’Lanterns. In the 1800’s a couple of waves of Irish immigrants came to America. The Irish immigrants quickly discovered that Pumpkins were bigger and easier to carve out. 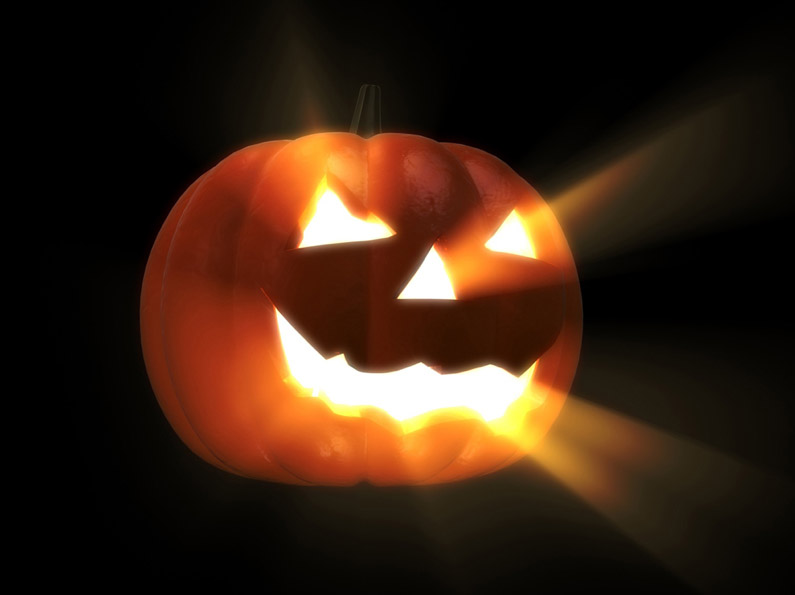