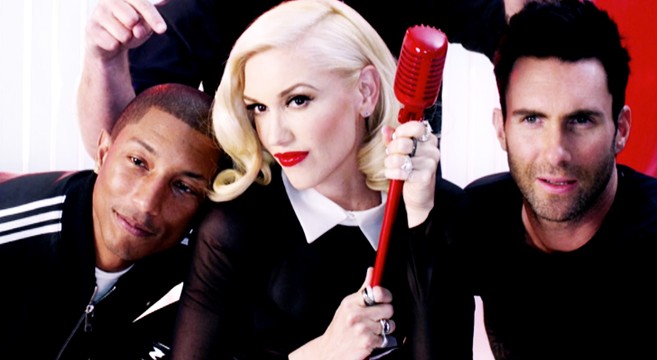 Fans of NBC’s The Voice learned last spring that longtime judges Adam Levine and Blake Shelton would be joined by Gwen Stefani and Pharrell Williams in those famous red chairs when season 7 of the smash hit reality series premieres on September 22.  The two new additions will easily secure The Voice once again as the #1 reality talent series on television.  Stefani replaces Christina Aguilera who is taking a season 7 hiatus to raise her newborn baby, and Pharrell replaces Cee-Lo who is not returning to the series.

The addition of Stefani (44) and Williams (41) adds some serious star power and street cred to the multi-genre judging panel, bringing in an entirely new bounty of loyal fans to the show.  Stefani’s new gig comes on the heels of giving birth in February to her third son with singer Gavin Rossdale.  In April she and her No Doubt bandmates severed ties with longtime manager Jim Guerinot.  Stefani partnered with mega manager Irving Azoff (who also reps Aguilera) and it was Azoff who brokered the deal with The Voice.  At the time, Stefani was in high demand by ABC execs to join the judging panel on Rising Star, but Azoff ain’t no hollaback manager by any means, and he carefully negotiated Stefani’s sweet escape to greener pastures at NBC.

As for Grammy Award winner and Academy Award nominee Pharrell, he could teach a master class on the art of transitioning from the streets of hip hop to the candy-colored halls of pop.  His unparalleled success with Daft Punk last year, along with his megawatt worldwide hit “Happy”, have made Pharrell an international superstar, and a seat in The Voice chair will undoubtedly help boost sales for his upcoming Dear Girl World Tour.

At the end of the day all of these judges are sitting in those red chairs for one reason and one reason only — to get rich.  After starting on the lower scale, Levine’s loyalty to the show (he has been on every season) has now earned him a reported base pay of $10-12 million per cycle of The Voice.  Blake Shelton, the least talented of all four judges, earns an estimated $6 million per season.  The Hollywood Reporter estimates Gwen Stefani’s debut salary for The Voice at an impressive $10 million for season 7, and it is believed Pharrell’s to be approximately $8 million.  Apart from salaries, the platform of The Voice allows for enormous crossover appeal and publicity for artists to showcase their newest work.  Aguilera and Levine’s “Moves Like Jagger” being the best example of this when the song became one of the biggest selling singles of all time, reaching #1 in 18 different countries, and securing Aguilera’s position as the fourth female artist to score #1 singles in three different decades, alongside Janet Jackson, Madonna and Britney Spears.

Stefani and Pharrell are taking the cue and getting in on the game as well.  Back in April, Pharrell and Stefani got warmed up for The Voice when they performed “Hollaback Girl” together during Pharrell’s Coachella set (they co-wrote the song together back in 2004), as well as a slicker version on The Voice stage which was taped earlier this summer (see both below).  You can expect much more from the pair in the months that follow.  (NOTE: It’s still uncertain if Stefani will be performing on The Voice stage with her best friends Brad Pitt and Angelina Jolie, but one can always hope).

According to sources, Christina Aguilera is most definitely the Queen of The Voice.  For season 5 which premiered in September 2013, Aguilera was pulling down more than $225,000 per hour/episode ($12.5 million for the season), while the other coaches — Adam Levine, Blake Shelton and CeeLo Green — were getting a measly $75,000 each per hour/episode.  Christina Aguilera’s net worth is pegged at more than $150 million, with Gwen Stefani and Pharrell Williams coming in at $80 million each.  Adam Levine has an estimated net worth of $65 million, with Blake Shelton’s estimated to be $50 million because he is the least talented of the four.  Be sure to follow The Voice on Facebook and stay tuned September 22 for the season premiere of season 7.

SEE ALSO: Four Red Chairs And One Billionaire: The Amazing Story Of How “The Voice” Almost Never Happened