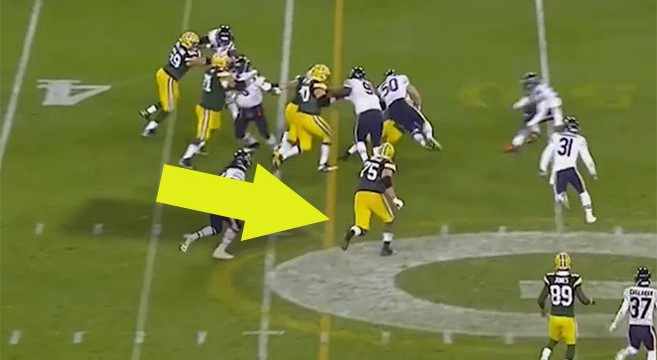 The Magic Yellow Line: The Story Behind The NFL’s Award-Winning Technology In The First-Down Line

As millions gather in living rooms around the world to watch Super Bowl 50 later today, there’s one technology that continues to be a staple of each and every NFL broadcast — the yellow virtual first-down line. The technology was created by the same engineers who devised the glowing hockey puck technology that was once used in NHL games to help viewers keep track of the often difficult to find puck on the TV screen. When fans complained it was too gimmicky the embellishment was done away with.

The inventors took what they learned from that failure and formed a new company called Sportvision Inc. which is where they created the 1st & Ten line. The 1st & Ten line was first broadcast during ESPN’s coverage of a Cincinnati Bengals-Baltimore Ravens game on September 27, 1998, and the rest is history.

One person who will most definitely be attending the Panthers-Broncos showdown at Levi’s Stadium in Santa Clara, California later today is none other than Beyoncé who is performing with Coldplay and Bruno Mars as part of the Super Bowl Halftime Show. Late yesterday the superstar released her stunning new track “Formation” which many are calling one of the greatest works of her entire career.

In an article entitled “Beyonce’s ‘Formation’: A Fiery Black Power Anthem and Call to Arms“, The Daily Beast‘s Kevin Fallon writes, “‘Formation’ is a booming meditation on black identity, the validity and transience of a person’s roots and history, and the crushing interplay between power and helplessness, agency and victimization. Bask in it. Dance to it. Listen to it. But, for the love of god, hear it.”

The New York Times writes, “The song’s subject is familiar Beyoncé self-affirmation, and the video is among the most politically direct work she’s done in her career, with implicit commentary on police brutality, Hurricane Katrina and black financial power.”

Previous post:
The WOW Files: Interactive Online Site Takes You Into The Wormhole Of Bosch’s Disturbing Masterpiece Next Post:
Time For A Reboot: The Top Ten Thought Patterns That Are Sabotaging Your Life