Dawn M. LaPointe is a photographer based in northern Minnesota who recently captured remarkable footage of what’s known as “ice stacking.” Lapointe writes, “Lake Superior put on a dramatic show with her new ice today. While shooting in Canal Park, I noticed the ice had pulled away from shore and felt the breeze at my back. I anticipated there would be some ice stacking as the massive sheet of ice met the shorelines, so I headed to Brighton Beach. The big lake did not disappoint!”

Lapointe adds, “Four hours of 12-15 mph steady winds from the SW led up to the movement of the large sheets of ice on Lake Superior. The conditions during the two hours of filming ranged from -8°F to +3°F air temp (-20°F to -8°F windchill) with winds 5-10 mph from the SW. As the massive sheets of ice met the rocky shorelines, they broke into large plates and stacked on shore, sounding much like breaking glass. The ice thickness being stacked on shore ranged from about 1/4″ thick to about 3″ thick. The sights and sounds were incredible!”

I couldn’t help but be reminded of Swedish avant garde pop artist, iamamiwhoami, and her video for “Vista” while watching Dawn’s footage. It’s not easy to make a sub-zero ice-laden environment look enticing, but these two videos kind of do the trick. 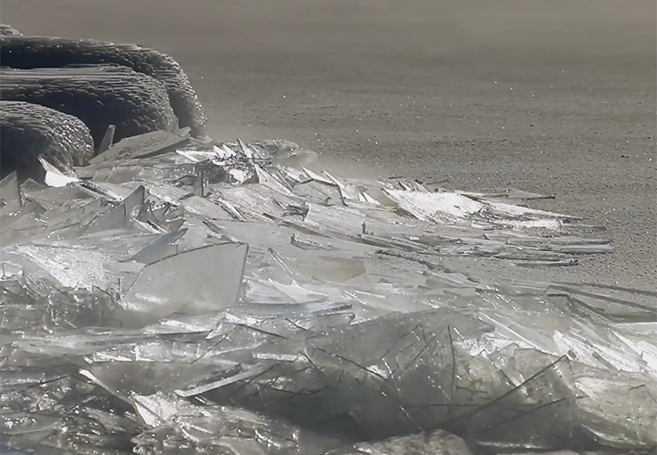 Previous post:
Enter The Surreal Farm Field In Virginia Filled With Huge 20-Foot-Tall Busts Of American Presidents Next Post:
Digg & Esquire Rank This Edit Of Marbles, Cake & Knives As The #1 Most Satisfying Video In The World