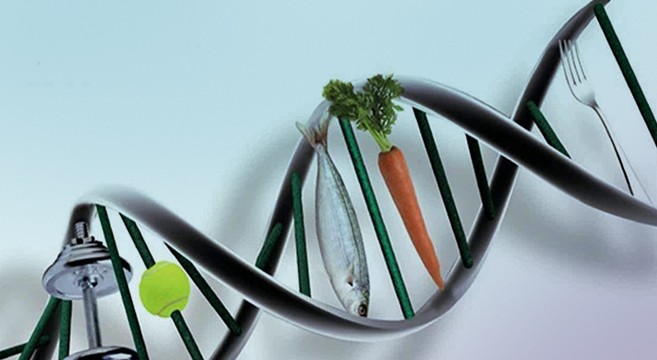 Veggie vs. Fish: Cornell’s Nutrigenomics Study Proves We Are Each Pre-Wired For One Specific Diet

A fascinating new study from Cornell University has discovered that each human body is genetically pre-wired for a specific kind of diet. Cornell researchers describe a genetic variation that has evolved in populations that have historically favored vegetarian diets, such as in India, Africa and parts of East Asia. A different version of this gene (called an allele) adapted to a marine diet was discovered among the Inuit in Greenland, who mainly consume seafood.

The vegetarian allele evolved in populations that have eaten a plant-based diet over hundreds of generations. The adaptation allows these people to efficiently process omega-3 and omega-6 fatty acids and convert them into compounds essential for early brain development and controlling inflammation. In populations that live on plant-based diets, this genetic variation provided an advantage and was positively selected in those groups. In Inuit populations of Greenland, the researchers uncovered that a previously identified adaptation is opposite to the one found in long-standing vegetarian populations: While the vegetarian allele has an insertion of 22 bases (a base is a building block of DNA) within the gene, this insertion was found to be deleted in the seafood allele.

“The opposite allele is likely driving adaptation in Inuit,” said Kaixiong Ye, co-lead author of the paper appearing March 29 in the journal Molecular Biology and Evolution. Ye is a postdoctoral researcher in the lab of Alon Keinan, associate professor of biological statistics and computational biology, and the paper’s co-senior author. “Our study is the first to connect an insertion allele with vegetarian diets, and the deletion allele with a marine diet,” Ye said. “It is the most interesting example of local adaptation that I have been fortunate to help study,” said Keinan. “Several studies have pointed to adaptation in this region of the genome. Our analyses combine to show that the adaptation is driven by an insertion of a small piece of DNA that we know its function. Moreover, when it reached the Greenlandic Inuit, with their marine-based diet rich in omega-3, it might have become detrimental.”

FADS1 and FADS2 are enzymes that are essential for converting omega-3 and omega-6 fatty acids into downstream products needed for brain development and controlling inflammation. Meat and seafood eaters have less need for increased FADS1 and FADS2 enzymes to get proper nutrition because their omega-3 and omega-6 fatty acid conversion process is simpler and requires fewer steps. This study is based on previous work by co-senior author Tom Brenna, professor of human nutrition and of chemistry, who showed the insertion can regulate the expression of FADS1 and FADS2 and hypothesized it could be an adaptation in vegetarian populations.

“Northern Europeans have a long history of drinking milk and they absorbed enough end products from milk for long-chain fatty acid metabolism so they don’t have to increase capacity to synthesize those fatty acids from precursors,” said Ye. “One implication from our study is that we can use this genomic information to try to tailor our diet so it is matched to our genome, which is called personalized nutrition,” he added. The researchers are not sure yet when the adaptation first occurred, as analyses of chimpanzee or orangutan genomes did not uncover the vegetarian allele. But there is evidence for the allele in early hominid Neanderthal and Denisovan genomes.

“It is possible that in the history of human evolution, when people migrated to different environments, sometimes they ate a plant-based diet and sometimes they ate a marine-based diet, and in different time periods these different alleles were adaptive,” meaning the alleles have a tendency to evolve under dietary pressures, Ye said. Kumar Kothapalli, a senior research associate in nutritional sciences, is the paper’s co-lead author. The study is funded by the National Institutes of Health and the U.S. Department of Agriculture.

TO WATCH THE CBS SATURDAY MORNING REPORT ON THE DISCOVERY FAST FORWARD TO THE 5:58 MARK.
.
[xyz-ihs snippet=”Veggie-Gene”] 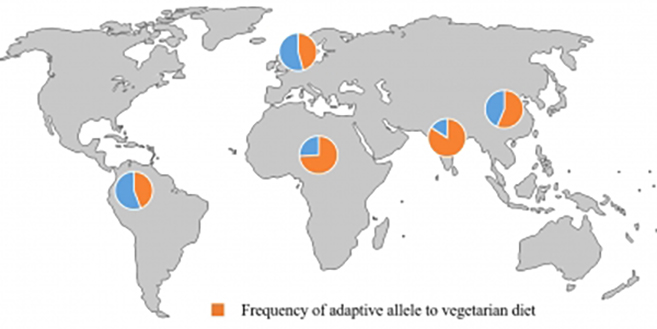 Previous post:
Ways to Spend Your Downtime When Traveling Next Post:
The WOW Files: This Stunning Cliffside Home Near Santa Barbara Is Seriously Blowing My Mind