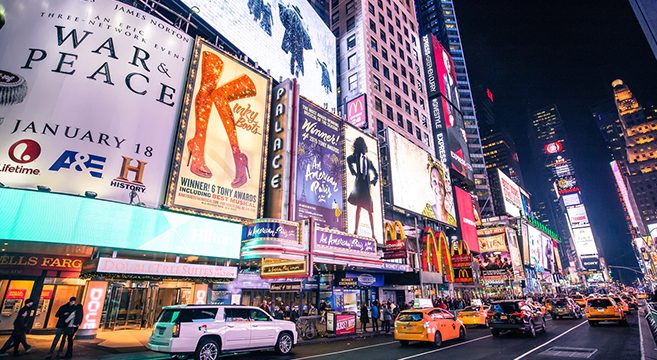 While much of the planet has been in lockdown during the battle to tame the coronavirus pandemic, the world of theater has largely ‘gone dark.’ The most famous venues around the globe have seen an extended period of being out of action for the first time in living memory. For many serious theater fans, this has heightened the desire to make a dream bucket list of destinations to travel to once the restrictions are lifted, to experience firsthand the essential must-see venues and productions that they’ve read so much about.

So once things get back to normal, it’s a surefire bet that many people from all over the world will be taking the opportunity to enact plans they’ve been making during the last few months. Traveling will be high on the list because some of the best-known theater landmarks are located in a relatively small selection of cities famous for their entertainment culture. The result is that it isn’t too difficult to predict where in the world things might get a little busy when the stage curtains go up again.

London’s West End is synonymous with high-quality theater, and some of the longest and most successful production runs in history have taken place there. Not only is it seen as a benchmark for the industry by theater-goers, but actors, writers, directors, and producers from around the world all recognize the kudos that comes from being involved in the London scene. Just one must-see venue for any theater lover visiting the UK’s capital is The Globe on the banks of the River Thames. This recreation of a classic early theater hosts productions of Shakespeare plays that are probably as close as you can get to the experience that the Bard himself would have enjoyed hundreds of years ago.

Elsewhere, the whole gamut of productions is usually on hand, from ‘off-Broadway’ style productions at the Donmar Warehouse and Young Vic, attracting the cream of international theater professionals through to the many larger and more well-known venues such as Sadler’s Wells, the National Theater and the Barbican.

Broadway in New York is possibly the single most famous destination for theater lovers everywhere. With the dedication of people such as Louise Gund, the Broadway Producer and Environmental Activist, the theaters both ‘on’ and ‘off’ the iconic thoroughfare manage to maintain the highest standards. Gund’s background of photographing Off-Broadway productions eventually led her to become a theater producer, and her credits in the past six or seven years include acclaimed versions of Fiddler on the Roof, Sylvia, and Six Degrees of Separation.

Forty-one professional theaters fall under the ‘Broadway’ umbrella, each with 500 or more seats, and the location in Midtown Manhattan means that it is a concentrated hub without equal anywhere else in the world. The Broadway Theater, the Palace Theater, and the Winter Garden Theater are the only three theaters to be found on the thoroughfare itself, and another strange fact is that the majority of Broadway productions are musicals.

As a city of culture, Paris has an unrivaled reputation, although many may think that has more to do with art galleries and museums rather than theater. The capital of France does have a grand tradition of theater though, with standout venues such as Odéon-Théâtre de l’Europe and Théâtre du Châtelet being two of the most well-known.

French playwrights span the ages, and although the country is famous for jealously guarding its cultural history, in recent years, the City of Light has begun to look towards including English-speaking audiences.

The very roots of the modern theater are to be found in ancient Greece and so it is no surprise that Athens is always near the top of the bucket lists of many true theater fans. The Odeon of Herodes Atticus, located by the Acropolis and the Lycabettus Theater situated on Lycabettus Hill, are just two examples of some of the oldest theatrical venues in the world.

On the other side of the world, Australian theater has developed in a unique way and, in so doing, has produced some of the biggest name actors in the world. The Sydney Festival showcases the homegrown talent that has come out of its world-class theater scene, with local venues such as the Belvoir St Theater and Griffin Theater being as important as the world-famous Opera House, which houses two theatrical stages.

Of course, there are many other cities dotted around the world that could feature on a theater lover’s dream bucket list, reflecting the full range of interests, appeals, and attractions that this particular entertainment industry offers.

Photo by Denys Nevozhai on Unsplash