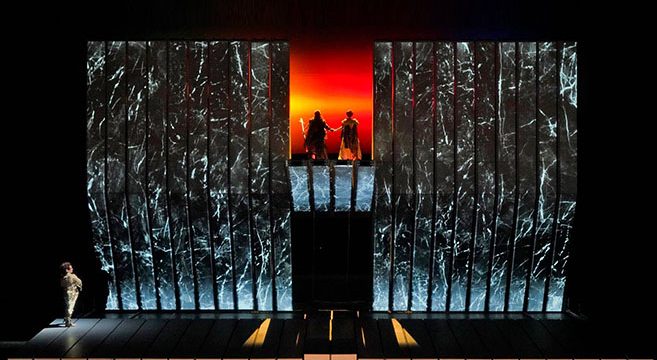 The Best 6 Minutes In Opera: How A Hallucination Birthed Wagner’s “Das Rheingold” Opening

It took Wagner 26 years, from 1848 to 1874, to complete the entire Ring Cycle, his 4-part opera masterpiece. But the first 6 minutes of the first cycle (Das Rheingold), which has given audience members more goosebumps than perhaps any other 6 minutes in opera history, was a difficult nut to crack for the composer. He struggled with that composition for nearly four years, but it was a half-dream state that led to Wagner’s legendary epiphany.

The inspiration for the opening of Das Rheingold came to Wagner on September 4, 1853, while he was in Spezia in Italy. According to his memoirs, he described “sinking in swiftly flowing water. The rushing sound formed itself in my brain into a musical sound, the chord of E flat major, which continually re-echoed in broken forms … I at once recognized that the orchestral overture to the Rheingold, which must long have lain latent within me, though it had been unable to find definite form, had at last been revealed to me.” Experts describe this kind of psychological state as an “acoustic hallucination.”

For opera fans lucky enough to live in New York, the Metropolitan Opera is bringing back one of its most incredible productions: the entire Ring Cycle as seen through the visionary production design of creative direction of Robert Lepage. In my opinion it is the single greatest set design of any opera in history. Das Rheingold can be seen as a solo ticket only one more time, on March 14th, and twice more as part of a ticket for all 4 cycles (on April 29 and May 6). You can get all the ticketing details at MetOpera.org.

Werner Herzog used the first 6 minutes of Wagner’s Das Rheingold in his 1979 horror classic Nosferatu The Vampire, which works incredibly well, as you’ll see in the video below.
.

Previous post:
Your Unconscious Mind Determines Your Conscious Mind’s Response 7 Seconds Ahead Of Time Next Post:
The Best Netflix Shows To Watch While Traveling