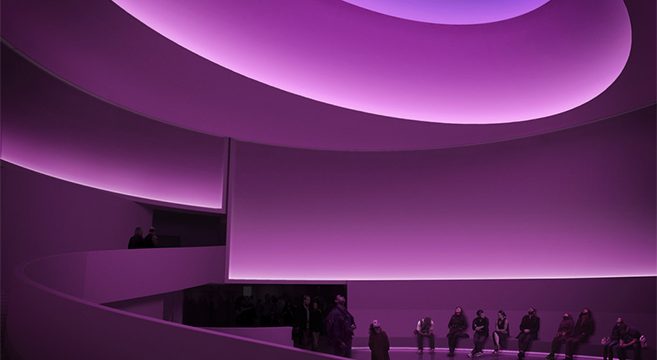 At the moment I’m currently obsessed with light artist James Turrell and his enormous body of work, and find myself devouring everything I can of his interviews, writings, and lectures. But it was during one interview in particular where Turrell introduced me to a scientific fact that detonated in my head with such force I had to research whether it was true or not.

During a July 2013 interview with Charlie Rose as he was promoting his Aten Reign installation at the Guggenheim, Turrell discussed his fascination with a branch of scientific experimentation that proves light knows when we are looking at it, and it behaves differently when being observed. “Light has different behavior through a defraction grading when we’re looking than when we’re not,” Turrell says. “That almost imbues it with consciousness.”

The science Turrell is referring to is from the mind-blowing Double Slit Experiment. If you think your brain is up for the challenge you can learn more about it at HighExistence.com.
.

YOU CAN WATCH JAMES TURRELL DESCRIBE THIS AT THE 20:40 MARK:

Previous post:
Margaret Atwood: If The State Denies You An Abortion Then Sue For All Expenses Incurred Next Post:
Your Unconscious Mind Determines Your Conscious Mind’s Response 7 Seconds Ahead Of Time