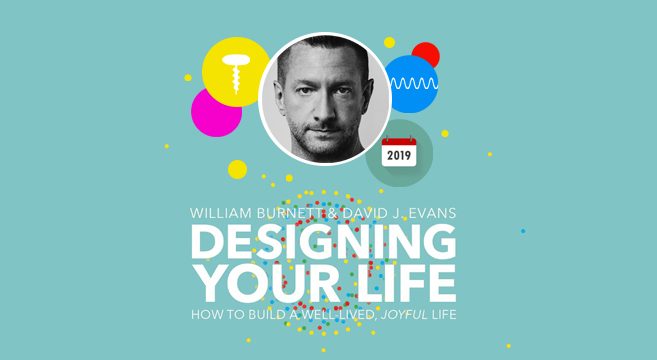 For years now, the most popular class at Stanford University has been Designing Your Life (ME104B). It’s part of the Life Design Lab, which itself is part of the Design Program at Stanford, founded by Bill Burnett and Dave Evans. “The notion that you need to have a passion and follow it is a destructive idea,” says Burnett, who teaches the Designing Your Life class with Evans. The class teaches its students how design thinking can help us create a life that is both meaningful and fulfilling, regardless of who or where we are, what we do or have done for a living, or how young or old we are. Students range in age from kids in their late teens to retirees in their 70s, with graduates raving about how much the course has changed their lives.

Recently, after years of being pursued by publishers who wanted to bring this course to a global audience, Burnett and Evans finally decided the time was right to compile the course’s wisdom into a book: Designing Your Life: How To Build A Well-Lived, Joyful Life. Last year I grabbed my own copy and it’s one of those rare books that I think about on almost a daily basis. At its core, the philosophy of Designing Your Life trains you to look at your life the same way a designer would look at a design project. When a designer meets the problem head-on, they make their first prototype (i.e. experiment). This is the very first step in the designer’s “critical path”. It’s only by running these experiments that they can get the data necessary to determine what the next experiment(s) will be. Life, as it turns out, operates in a very similar way.

For the past 14 months, this book has taught me to look at life as laboratory of prototype-building and experimentation, often with numerous prototypes running at the same time. Whether it’s the experiments I’ve run for work, or play, or love, or health, or creativity, or spirituality, or personal finance, and beyond–this book has completely transformed the way I perceive my life at large, and how I navigate through it.

I’ve created more prototypes in these past 14 months than I can remember, and each of them has given me vital “life data” that informs what the next experiment will be. And much like scientific experiments, there is no such thing as a bad result–all results are brilliant because they inform what you do next.

But of all the prototypes I’ve created for myself, they’re relatively minor compared to the one I started two days ago. For several years now I’ve often done 30-day cleanses (usually twice a year), in which I cut out all alcohol, smoke, sugar, and so on and so forth. And whenever I finish, the results are always the same–I have more energy than I know what to do with, my sleeps are amazing, I lose tons of weight, and I’m as happy as could be. But invariably, the experiment comes to a close and before you know it I’m enjoying a few glasses of Sauvignon Blanc with my cheeseburger again.

So two days ago I started building my biggest prototype to date: a full year without booze and bad food. Why didn’t I start this sooner? Turning 43 recently might have been exactly the kick in the pants I so badly needed. And a recent move to Los Angeles, where the sun always shines and there’s a yoga class and crystal store on every corner, likely planted the seed in my mind as well.

In the past, whenever I would be nearing the end of a 30-day cleanse I would always notice major improvements in nearly every dimension of my life, but the most exciting one of all was what happened to my energy–of the vibrational kind: an email would randomly appear in my inbox that came with a huge beautiful surprise, I would meet someone who would change my life, I would get pulled to a place or a trip that revealed incredible new things to me, I would fall in love, I would read tons of books, I would see things completely differently, and so on. In quantum physics, as David Lynch describes below, this vibrational field is known as the Unified Field. Its sister theory is known as the Law of Attraction: if your vibration is good you will attract good things, and if you vibration is bad you will find yourself with a flat tire before you go to work as you’re having a fight with someone on the phone (and yes, it will be raining).

So here’s to kicking off a 12-month journey/experiment/prototype. A moment worthy of the wise words of Thomas Aquinas: “If the highest aim of a captain were to preserve his ship, he would keep it in port forever.”

You can get your own copy of Designing Your Life: How To Build A Well-Lived, Joyful Life on Amazon.
.

Previous post:
This Is The Surreal Turquoise Lake Where Trees Are Growing Upside Down Next Post:
CBD Oil In School And Sports