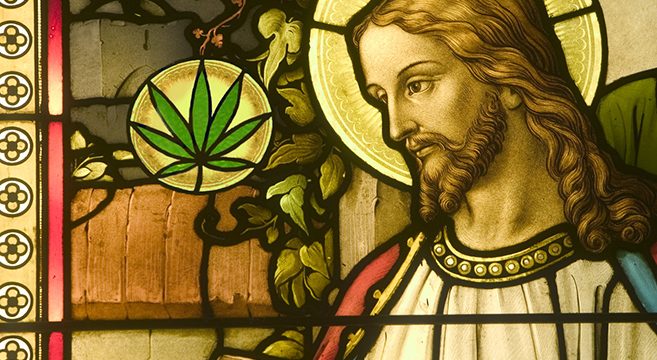 Experts are now convinced beyond a shadow of a doubt that the active ingredient in Jesus’s anointing oil was cannabis. Arguably the most healing natural oil known to man, cannabis’s relationship with civilization goes all the way back to the Egyptians. “When researchers found the tomb of the ancient Egyptian Pharaoh Ramses II, they discovered his mummy buried with particles of kief,” writes Ranker. “At a different site, scientists found another mummy buried with almost two pounds of herb. In Romania, there’s evidence of pot smoking that goes back as far as 5,000 years ago.”

Cannabis has an ancient connection to religion as well. It’s widely believed to have been a major part of ancient Judaism, and sacred Hindu texts reveal the use of cannabis as far back as 1,400 B.C. “There can be little doubt about a role for cannabis in Judaic religion,” Carl Ruck, professor of classical mythology at Boston University tells The Guardian. “Referring to the existence of cannabis in anointing oils used in ceremonies, he added: ‘Obviously the easy availability and long-established tradition of cannabis in early Judaism would inevitably have included it in the [Christian] mixtures.” Cannabis was widely available during Jesus’s lifetime, and the fact that it’s not more commonly known to have been the key ingredient in his anointing oil’s recipe can be traced to a mistranslation.

“Scholars have pointed to a specific text from the Bible to support this theory,” explains All Is Interesting. “They claim that a recipe for Jesus’ holy anointing oil in Exodus 30: 22-25 actually contains cannabis: ‘Take the following fine spices: 500 shekels of liquid myrrh, half as much of fragrant cinnamon, 250 shekels of q’aneh-bosm, 500 shekels of cassia — all according to the sanctuary shekel — and a hind of olive oil. Make these into a sacred anointing oil, a fragrant blend, the work of a perfumer. It will be the sacred anointing oil.’ ”

The mysterious herb q’aneh-bosm referred to in this passage is now better known as keneh-bosm, and historian Chris Bennett cites the work of Polish etymologist Sula Benet who, in 1936, demonstrated that the root of the word “Kan” translates to “hemp” or “reed,” while the “bosom” translates to “aromatic“.

This is the first time the Bible references the use of cannabis oil. It’s from the story of Moses and the Burning Bush, when Moses is given the recipe for the holy anointing oil. He’s also given explicit instructions that the oil is only to be administered to priests and kings. Jesus was having none of this, and he democratized the use of the oil for everyone, thereby making him a highly controversial figure for his time.

Jesus was eventually given the last name of “Christ” by his followers, a religious title meaning “the anointed one,” as in, anointed or blessed with sacred anointing oil. “During Jesus’s lifetime, epilepsy was often described as demon possession,” explains Ranker. “And the New Testament is full of stories where Jesus ‘casts out devils.’ In today’s language, we would describe this as curing epilepsy and Parkinson’s Disease. Interestingly, medical marijuana — and especially cannabis oil — is regularly used today [to treat Parkinson’s tremors and epileptic seizures].”

The Bible contains many stories of Jesus curing people of blindness and skin problems. It comes as no surprise that cannabis oil miraculously cures not only seizures, but also glaucoma and eczema.

The Bible has no account of Jesus’s life from the ages of 13 to 29. The reason is because during this time he was exploring Afghanistan, Pakistan, Kashmir, India and Tibet. It was during these sixteen years that he would have discovered cannabis oil, and it’s also the period of his life when he became a Buddhist monk names Issa. You can read the amazing historical account of this chapter of his life HERE.