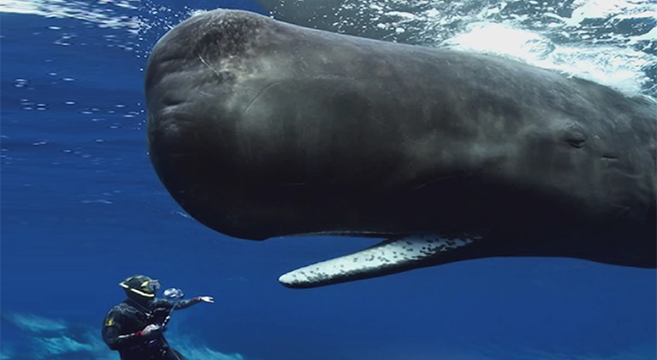 Whales and dolphins are the most intelligent creatures in existence with the highest levels of consciousness. And with that level of evolution has come some extraordinary abilities. The sperm whale, for instance, is the loudest animal on Earth, and can produce sounds at 236 decibels. Their communication is so loud, in fact, that researchers believe sperm whales can communicate with their kind on the opposite side of the planet. But with this kind of power, scuba-diving sperm whale researchers are faced with an enormous risk underwater. As James Nestor explains, the sounds are loud enough to vibrate a human body to death. Nestor is a freediver and author of the book DEEP: Freediving, Renegade Science, and What the Ocean Tells Us about Ourselves.

SEE ALSO: BBC Documentary Discovers That Dolphins Love Getting High With Each Other On Narcotic Puffer Fish
.

Previous post:
The Mystery Of Mary Trump: How Donald’s Dark Relationship With His Mom Explains His Mania Next Post:
HBO’s Paranormal Drama ‘Here And Now’ Explores The Powerful Phenomenon & Meaning Of 11:11