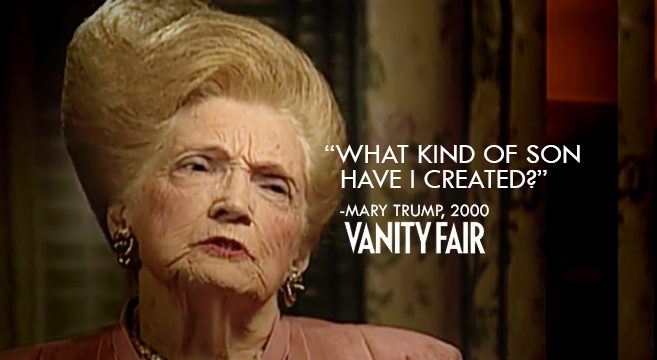 The Mystery Of Mary Trump: How Donald’s Dark Relationship With His Mom Explains His Mania

One of Sigmund Freud‘s most renowned theories is the Oedipus Complex, part of his larger theory of the psychosexual stages of development. In a nutshell, it describes “a child’s feelings of desire for his or her opposite-sex parent and jealousy and anger toward his or her same-sex parent,” writes Kendra Cherry. “Essentially, a boy feels that he is competing with his father for possession of his mother, while a girl feels that she is competing with her mother for her father’s affections. According to Freud, children view their same-sex parent as a rival for the opposite-sex parent’s attentions and affections.”

If Freud were alive today he would no doubt be fascinated by what is arguably the most extreme case of Oedipus Complex in modern history — Donald Trump. With each passing day we are reminded of this man’s manic behavior, his explosive super-ego, and his disturbing history with women, his wives, and even his own daughter. But what about his mother? So much of a person’s psychological profile extends far beyond genetics alone, and is developed for the most part by one’s relationship with his or her parents. With the fate of the modern world resting squarely in the hands of someone as unstable as Donald Trump, it’s worth trying to understand what went right and what went wrong with his parentals during his adolescence.

Trump had a famously warm relationship with his father, New York real estate developer Fred Trump (1905-1999). But his relationship with his mother Mary Trump (1912-2000) was an entirely different story. In an in-depth feature story for POLITICO, award-winning journalist Michael Kruse took a deep dive into Trump’s life history with his mother, and the resulting insights are a revelation to say the least.

In The Mystery of Mary Trump, Kruse writes: “[Mary Trump] and her husband had sent their fourth and most incorrigible child, [Donald], who as a boy threw cake at kids at parties and erasers at his teachers at his private elementary school, first to Sunday morning Bible classes, like his siblings—and then, unlike his siblings, to a stringent military academy an hour and a half upstate shortly after he turned 13. Now, in the twilight of her life, beset with debilitating bone loss, she was being sucked into his tawdry, nonstop soap opera, rendered a bit player in a media frenzy, captured by paparazzi while sitting in the rear of her chauffeured car, looking steely and peeved. That year, according to VANITY FAIR, Mary Trump asked Ivana Trump, her soon-to-be-ex-daughter-in-law, a pointed question:
.

‘What kind of son have I created?‘“

.
As Kruse discovered in talking with many of Donald’s closest friends of his youth, Mary Trump was almost non-existent whenever they came to the house. Donald’s father, on the other hand, would often come downstairs and play with them. You can read the full story at POLITICO.com and watch Kruse’s CNN interview below.

Only a personal therapist of Donald Trump’s could make an accurate diagnosis as to whether or not his manic behavior is connected to his relationship with his mother — a woman whose photograph Trump’s closest assistant for years, Hope Hicks, described as “noticeably absent“.

If Freud were alive, perhaps he would connect Trump’s obsession with being the biggest real estate developer in New York, to an unconscious desire to ‘kill his father’ by eclipsing his dad’s success. And if the Oedipus Complex is true, perhaps Trump’s unwavering appetite for young wives could be an attempt to fill the void of love his mother created by continuously replacing his wives to match the same age his mother was in the years when she neglected him the most.

“But [Mary Trump’s] relative trace existence in the president’s own narrative of his life is a reflection of his upbringing in Jamaica Estates, Queens, say boyhood friends and others who came to know him well as an adult. ‘When I would play with Donald,’ says Mark Golding, an early pal, ‘his father would be around and watch him play. His mom didn’t interact in that way.’ That’s the recollection, too, of Lou Droesch, who was buddies with Fred Trump Jr. and knew his kid brother as a nettlesome tag-along. ‘We rarely saw Mrs. Trump,’ he told me, saying she did sometimes give them money to take him to go get some ice cream. ‘But we did see a lot of the housekeeper.’ This distance, according to a former close business associate and friend, is a dynamic that never changed. ‘Donald was in awe of his father,’ this person said, ‘and very detached from his mother.’ … ‘You don’t have to be Freud or Fellini to interpret this,’ says Mark Smaller, the immediate past president of the American Psychoanalytic Association.”

Perhaps when Mary Trump asked Trump’s first ex-wife, Ivana, in 2000, “What kind of son have I created?”, her worry might have had less to do with a concern for her son, and could have been stemming much more from a sense of guilt within herself that, if she had been a more loving mother in Donald’s formative years, she might have been able to prevent the nightmare that she was watching unfold around her — a nightmare that has now enveloped the entire world eighteen years later.
. 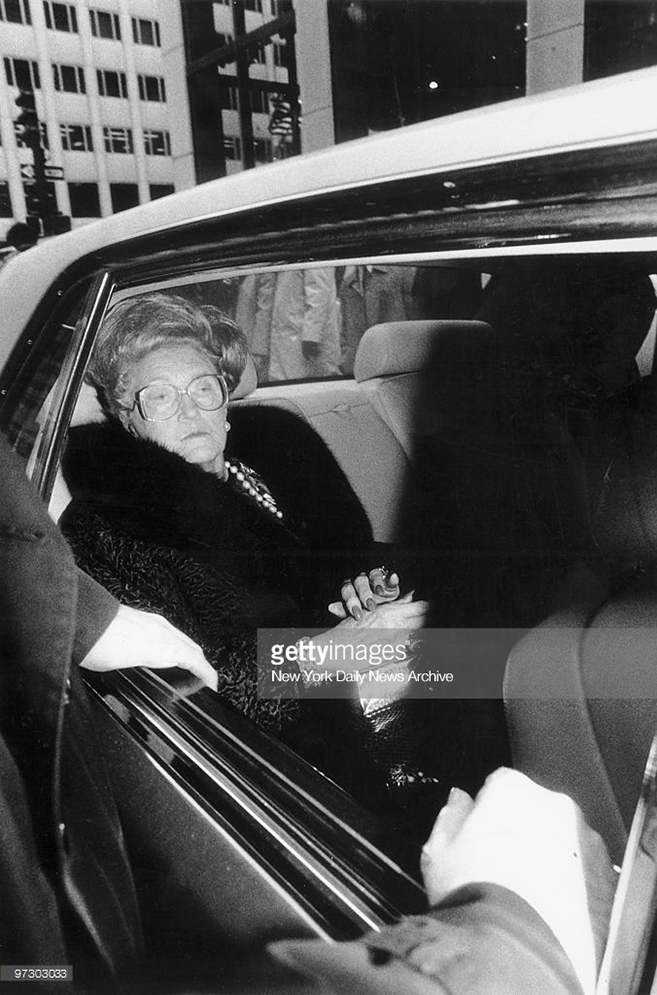