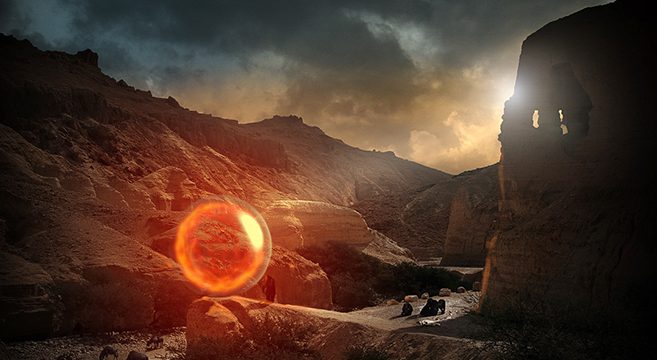 A Freedom Of Information Act (FOIA) request has led the CIA to publish a report on a terrifying UFO ‘revenge’ attack that happened to a Siberian military unit in March 1993. The incident involved a UFO that was shot down by a surface-to-air missile. What happened next led one CIA official to refer to the case as “a horrific picture of revenge on the part of extraterrestrial creatures, a picture that makes one’s blood freeze.” The following is typed copy of the original report from the NOIA archives on the Central Intelligence Agency’s website and the PDF link of the original paperwork:

“U.S. intelligence obtained a 250-page file on the attack by a UFO on a military unit in Siberia. The file contains not only many documentary photographs and drawings, but also testimonies by actual participants in the events. One of the CIA representatives referred to this case as ‘a horrific picture of revenge on the part of extraterrestrial creatures, a picture that makes one’s blood freeze.’ According to the KGB materials, a quite low-flying spaceship in the shape of a saucer appeared above a military unit that was conducting routine training maneuvers. For unknown reasons, somebody unexpectedly launched a surface-to-air missile and hit the UFO. It fell to Earth not far away, and five short humanoids with ‘large heads and large black eyes’ emerged from it. It is stated in the testimonies by the two soldiers who remained alive that, after freeing themselves from the debris, the aliens came close together and then ‘merged into a single object that acquired a spherical shape.’ That object began to buzz and hiss sharply, and then became a brilliant white. In a few seconds, the spheres grew much bigger and exploded by flaring up with an extrememly bright light. At that very instant, 23 soldiers who had watched the phenomenon turned into… stone poles. Only two soldiers who stood in the shade and were less exposed to the luminous explosion survived. The KGB report goes on to say that the remains of the UFO and the ‘Petrified Soldiers’ were transferred to a secret scientific research institution near Moscow. Specialists assume that a source of energy that is still unknown to Earthlings instantly changed the structure of the soldiers’ living organisms, having transformed it into a substance whose molecular composition is no different from that of limestone. A CIA representative stated: ‘If the KGB file corresponds to reality, this is an extremely menacing case. The aliens possess such weapons and technology that go beyond all our assumptions. They can stand up for themselves if attacked.'”

You can see the page for yourself below. Aside from the disturbing nature of the report, I’m fascinated by the CIA’s FOIA Reading Room which houses a massive online archive of all its FOIA requests. When I showed this to a friend he quickly discovered another of the site’s incredible set of files — the CIA’s Stargate Program which deals with the existence of psychokinesis, telepathy, and other mental powers. To dive into the CIA’s Stargate program you can visit all 624 pages of the website’s links on Stargate Program at Central Intelligence Agency. And for that matter, you can enter “UFO” into the search bar while you’re there — there are 87 pages of links on UFOs as well.

In a similar release of British documents back in 2010 the BBC reported how Prime Minister Winston Churchill was involved in covering up the existence of UFOs. The British National Archives released a large selection of documents dating back to the 1950s which provide a fascinating window into the level of fear that overcame Churchill when the Royal Air Force alerted him of airborne encounters with enormous, fast-moving metallic objects in the skies above the United Kingdom. There is a good chance that the files would never have been released had it not been for the grandson of one of Churchill’s personal bodyguards who wrote to the British Ministry of Defense in 1999 hoping to learn more about the incident. The account of this man’s grandfather, along with Churchill’s reaction, indicate how serious this encounters were taken not only by Churchill but also by U.S. President Dwight D. Eisenhower:

The letter describes how the man’s grandfather, who served with the RAF in World War II, was present when Churchill went to discuss a UFO sighting with Dwight Eisenhower. The incident involved an RAF reconnaissance plane, returning from France or Germany, that was said to have been intercepted by an unidentified metallic object near the English coastline”

“During the discussion with Mr Churchill, a consultant (who worked in the Cumbria area during the war) dismissed any possibility that the object had been a missile, since a missile could not suddenly match its speed with a slower aircraft and then accelerate again. He declared that the event was totally beyond any imagined capabilities of the time. Another person at the meeting raised the possibility of an unidentified flying object, at which point Mr. Churchill declared that the incident should be immediately classified for at least 50 years and its status reviewed by a future Prime Minister.”

A Defense Ministry official’s response from September, 1999 was also among the files. It reads: “It was generally the case that before 1967 all UFO files were destroyed after five years as there was insufficient public interest in the subject to merit their permanent retention.” According to another note found among the new files, however, such claims were taken extremely seriously by Churchill and his staff. By 1957, ministers were commissioning weekly reports on UFO sightings from a committee of intelligence experts. The documents reveal a total of 16 UFO incidents from the time period.
. 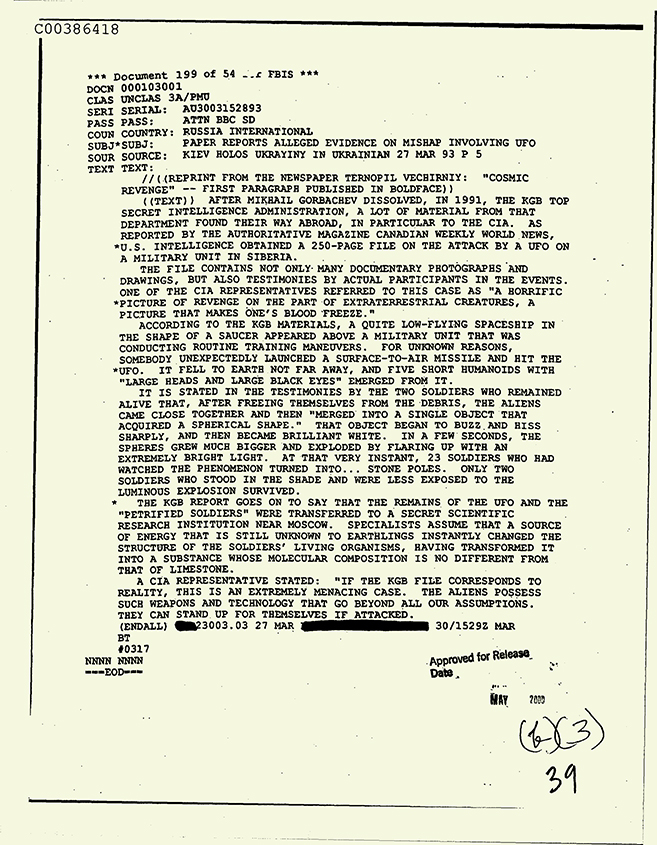