The Law Of Lotus Mud: Why Those Who Suffer The Most Are Most Likely To Reach Enlightenment

“For most people, spiritual awakening is a gradual process. Rarely does it happen all at once. When it does, though, it is usually brought about by intense suffering,” writes Eckhart Tolle. “That was certainly true in my case. For years my life alternated between depression and acute anxiety. One night I woke up in a state of dread and intense fear, more intense than I had ever experienced before. Life seemed meaningless, barren, hostile. It became so unbearable that suddenly the thought came into my mind, ‘I cannot live with myself any longer.’ The thought kept repeating itself several times. Suddenly, I stepped back from the thought, and looked at it, as it were, and I became aware of the strangeness of that thought: ‘If I cannot live with myself, there must be two of me – the I and the self that I cannot live with.’ And the question arose, ‘Who is the ‘I’ and who is the self that I cannot live with?’ There was no answer to that question, and all thinking stopped. For a moment, there was complete inner silence. Suddenly I felt myself drawn into a whirlpool or a vortex of energy. I was gripped by an intense fear, and my body started to shake. I heard the words, ‘Resist nothing,’ as if spoken inside my chest. I could feel myself being sucked into a void. Suddenly, all fear disappeared, and I let myself fall into that void. I have no recollection of what happened after that.”

This is Eckhart Tolle’s extraordinary personal testament of the moment he experienced the beginning of his spiritual awakening. Twenty years later, Eckhart has inspired millions of people with his true story. “The next morning,” he adds, “I awoke as if I had just been born into this world. Everything seemed fresh and pristine and intensely alive. A vibrant stillness filled my entire being. As I walked around the city that day, the world looked as if it had just come into existence, completely devoid of the past. I was in a state of amazement at the peace I felt within and the beauty I saw without, even in the midst of the traffic. I was no longer labeling and interpreting my sense perceptions – an almost complete absence of mental commentary. To this day, I perceive and interact with the world in this way: through stillness, not through mental noise. The peace that I felt that day, more than 20 years ago, has never left me, although it has varying degrees of intensity.”

“At the time, I had no conceptual framework to help me understand what had happened to me,” writes Tolle. “Years later, I realized that the acute suffering I felt that night must have forced my consciousness to withdraw from identification with the unhappy self, the suffering ‘little me,’ which is ultimately a fiction of the mind. This withdrawal must have been so complete that the suffering self collapsed as if the plug had been pulled out of an inflatable toy. What was left was my true nature as the ever present ‘I AM’: consciousness in its pure state prior to identification with form. You may also call it pure awareness or presence.”

The connection between suffering and enlightenment is essential. There can be no lightness without darkness, and this concept is the very foundation of Buddhism. In his most essential teaching of all, Buddha himself said, “I teach only two things: suffering and the end of suffering.” His wisdom lives on in the spiritual practice of such zen masters as Thich Nhat Hanh who founded the Plum Village monastery in Bordeaux, France, in the 1960s.

The teachings of Thich Nhat Hanh are the centerpiece of the stunning new documentary, Walk With Me, a fascinating and immersive exploration of what it means to devote one’s life to mindfulness. The filmmakers gained unprecedented access to the famous secluded monastery in the South West of France, where they captured the daily routine and rituals of monks and nuns on a quest to develop a deep sense of presence. It is a powerful rumination on the pursuit of happiness, living in the present, and our attachment to material things. But perhaps most insightful is its examination of the role suffering plays in one’s path towards enlightenment.

Born in central Vietnam in 1926, Thich Nhat Hanh was a novice monk in Vietnamese Buddhism by the age of sixteen. He founded the Engaged Buddhism movement, coining the term in his book Vietnam: Lotus in a Sea of Fire. In 1961 he travelled to the United States to teach Comparative Religion at Princeton University and the following year went on to teach and research Buddhism at Columbia University. In Vietnam in the early 1960s, Thich Nhat Hanh founded the School of Youth and Social Service, a grass-roots relief organization of 10,000 volunteers based on the Buddhist principles of non-violence and compassionate action. As a scholar, teacher and engaged activist in the 1960s, Thich Nhat Hanh also founded the Van Hanh Buddhist University in Saigon, La Boi Publishing House, and an influential peace activist magazine. In 1966 he established the Order of Interbeing, a new order based on the traditional Buddhist Bodhisattva precepts.

In 1966 he travelled once more to the U.S. and Europe to make the case for peace and to call for an end to hostilities in Vietnam. It was during this 1966 trip that he first met Dr. Martin Luther King Jr., who nominated him for the Nobel Peace Prize in 1967. Yet as a result of this mission both North and South Vietnam denied him the right to return to Vietnam, and he began a long exile of 39 years.

Thich Nhat Hanh has written more than 100 books, and it’s various excerpts from his diary, Fragrant Palm Leaves (1962-1966), which connect each chapter of Walk With Me. “If you tarnish your perceptions by holding on to suffering that isn’t really there, you create even greater misunderstanding,” he writes. “One-sided perceptions like these create our world of suffering. We are like an artist who is frightened by his own drawing of a ghost. Our creations become real to us and even haunt us.”

But it’s perhaps his 2014 book, No Mud, No Lotus: The Art of Transforming Suffering, which highlights the connection between suffering and enlightenment most clearly. “Most people are afraid of suffering. But suffering is a kind of mud to help the lotus flower of happiness grow. There can be no lotus flower without the mud … Without suffering, there’s no happiness. So we shouldn’t discriminate against the mud. We have to learn how to embrace and cradle our own suffering and the suffering of the world, with a lot of tenderness.”

“The function of mindfulness is, first, to recognize the suffering and then to take care of the suffering,” writes Thich Nhat Hanh. “The work of mindfulness is first to recognize the suffering and second to embrace it. A mother taking care of a crying baby naturally will take the child into her arms without suppressing, judging it, or ignoring the crying. Mindfulness is like that mother, recognizing and embracing suffering without judgement. So the practice is not to fight or suppress the feeling, but rather to cradle it with a lot of tenderness. When a mother embraces her child, that energy of tenderness begins to penetrate into the body of the child. Even if the mother doesn’t understand at first why the child is suffering and she needs some time to find out what the difficulty is, just her acto f taking the child into her arms with tenderness can already bring relief. If we can recognize and cradle the suffering while we breathe mindfully, there is relief already.”

“The soil of our mind contains many seeds, positive and negative. We are the gardeners who identify, water, and cultivate the best seeds … According to the creation story in the biblical book of Genesis, God said, ‘Let there be light.’ I like to imagine that light replied, saying, ‘God, I have to wait for my twin brother, darkness, to be with me. I can’t be there without the darkness.’ God asked, ‘Why do you need to wait? Darkness is there.’ Light answered, ‘In that case, then I am also already there.'”

To learn how you can host a screening of Walk With Me in your own city or town visit WalkWithMeFilm.com. You can watch the trailer below, and I’ve attached some of my other favorite related videos as well, including some gems from Buddhist nun Pema Chodron. 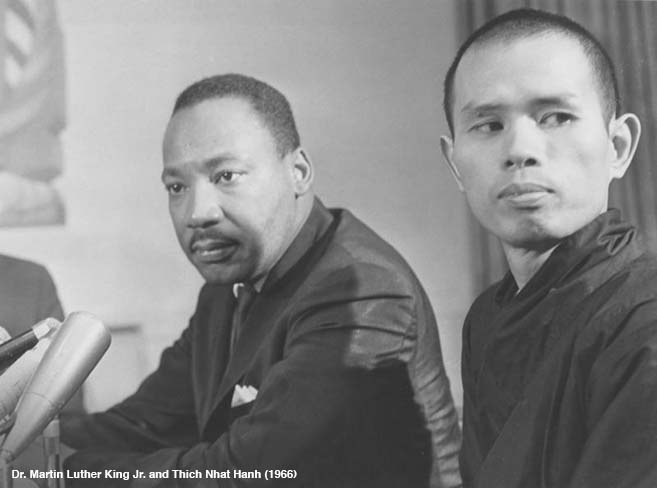 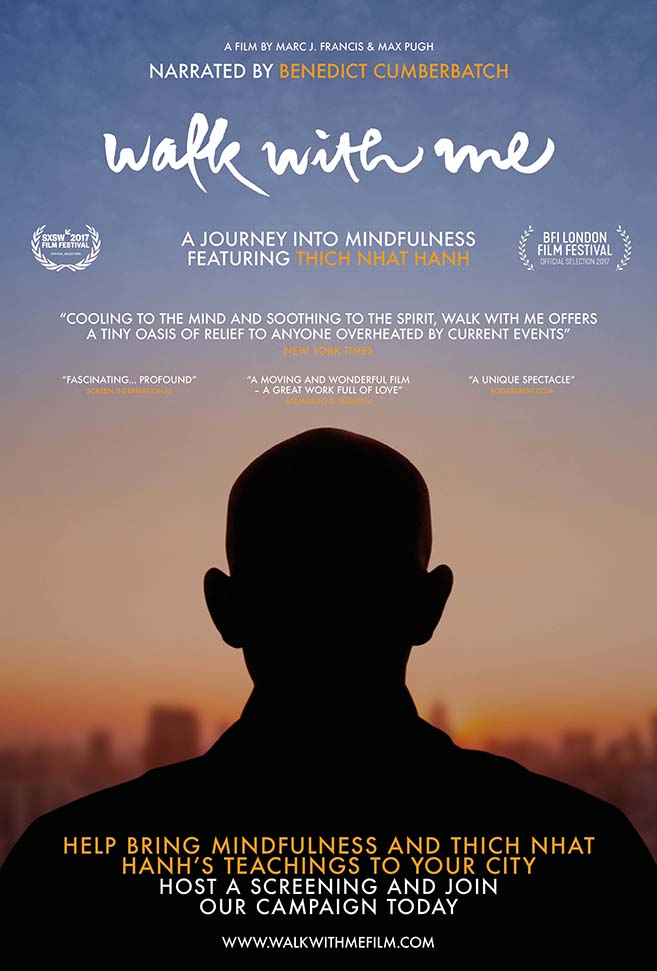