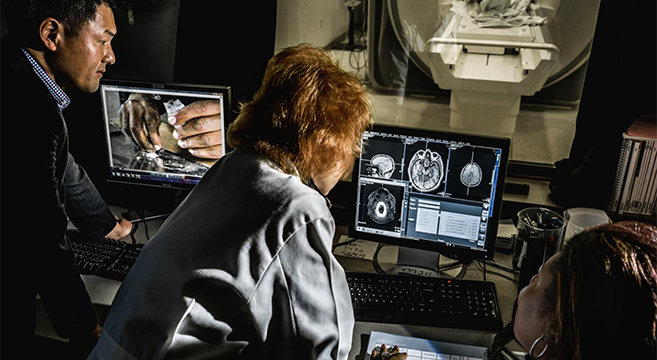 21 million Americans are addicted to drugs and alcohol, and nearly 1 in every 20 people in the world is an alcoholic (i.e. 350 million people). Let those numbers sink in for a moment. It’s difficult, right? That is an incomprehensible number of people for the human brain to fathom. But that same organ that has trouble wrapping itself around a number of this scale also lies at the very heart of addiction itself. In their brand new September issue, National Geographic explores the science of addiction’s impact on the brains’s pathways, and author Fran Smith joined CBS This Morning earlier today to discuss the issue which covers the devastating impact of addiction, the neural mechanics behind it, and a new crop of breakthroughs and treatments that are bringing us closer to a cure than ever before.

“After spending decades probing the brains of drug-loving lab animals and scanning the brains of human volunteers, scientists have developed a detailed picture of how addiction disrupts pathways and processes that underlie desire, habit formation, pleasure, learning, emotional regulation, and cognition,” writes Smith for National Geographic. “Addiction causes hundreds of changes in brain anatomy, chemistry, and cell-to-cell signaling, including in the gaps between neurons called synapses, which are the molecular machinery for learning. By taking advantage of the brain’s marvelous plasticity, addiction remolds neural circuits to assign supreme value to cocaine or heroin or gin, at the expense of other interests such as health, work, family, or life itself.”

The issue charts many aspects from the world of addiction, but one of the most fascinating comes from the lab of psychiatrist Luigi Gallimberti in in Padua, Italy. It’s here where Gallimberti has developed a treatment called transcranial magnetic stimulation (TMS), which applies electromagnetic pulses to the prefrontal cortex, and life-long, raging cocaine addicts are walking away from their TMS treatments seemingly cured. “[Gallimberti] and his partner, neurocognitive psychologist Alberto Terraneo, teamed up with Bonci to test the technique. They recruited a group of cocaine addicts: Sixteen underwent one month of brain stimulation while 13 received standard care, including medication for anxiety and depression. By the end of the trial, 11 people in the stimulation group, but only three in the other group, were drug free. The investigators published their findings in the January 2016 issue of the journal European Neuropsychopharmacology. That prompted a flurry of publicity, which drew hundreds of cocaine users to the clinic. Perotti came in edgy and agitated. After his first session, he says, he felt calm. Soon he lost the desire for cocaine. It was still gone six months later. ‘It has been a complete change,’ he says. ‘I feel a vitality and desire to live that I had not felt for a long time.'”

You can read the entire issue at NationalGeographic.com. I’ve also attached some other remarkable mind-expanding gems from the world of addiction research, and you can watch them all in full below.
.
Feature image courtesy of National Geographic