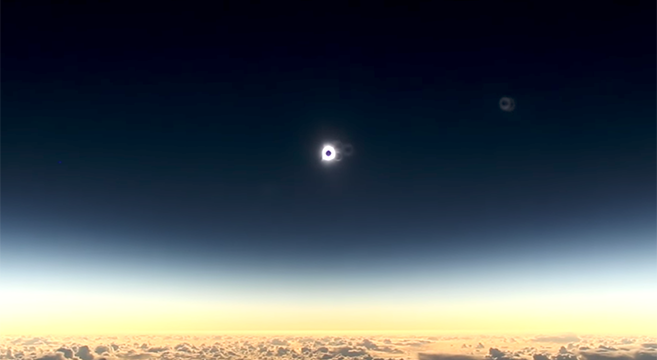 Tomorrow’s solar eclipse will dazzle most of North America as it moves along its path from northern Oregon down towards South Carolina. Although the Moment of Totality will be 100% for only a thin slice of land along that path, the partial eclipse for the rest of us will still be mindblowing. But during a total and partial solar eclipse there are other phenomena to watch out for on the ground instead of the sky.

1. CRESCENT SHADOWS: One such phenomenon are “crescent shadows.” To see them (even if you’re in the partial zones), turn your back to the sun and make the pound sign with your fingers (see photo below). When the sun passes through the small spaces between your fingers it will cast strange crescent shapes on the ground.

2. MOON’S SHADOW: If you are lucky enough to be in the Path of Totality, be sure to also pay attention to the ground as you watch for the shadow of the Moon to come racing towards you. But keep your eyes peeled — it will be moving at 1,600 miles per hour.

3. SHADOW BANDS: In the seconds right before totality, watch for think slices of light moving across the ground, and even over your feet. Known as “shadow bands,” they were first discovered in the 9th century but nobody has a clue what causes them. Some speculate it has something to do with how light is refracted by the atmosphere. But this is merely a guess.

4. ORANGE RING: If you’re in or close to the Path of Totality, it will appear as if the Sun has set at the exact same time everywhere you look in the 360 degrees around you. While a typical sunset’s signature is a wash of orange just above it, a total solar eclipse’s “sunset” leaves an orange ring all the way around the horizon. This phenomenon can be seen in the video below. It was filmed on Flight #870 from Anchorage to Honolulu on March 8, 2016. The pilots diverted their flight path just so their passengers could catch the solar eclipse from 35,000 feet.

5. BAILY’S BEADS: Immediately before the totality, watch for small flashes of light around the circumference of the Moon. Known as “Baily’s Beads,” these small flashes occur when sunlight passes through the huge canyons and deep mountainous valleys on the Moon’s surface.

6. THE ENVIRONMENT AROUND YOU: The Sun has an enormous impact on the natural world that surrounds us. As the sunlight begins to disappear, pay close attention to your surroundings. Perhaps the birds will stop chirping, or the dogs and cats will start behaving strangely. You will also notice a quick change in temperature.

7. LOOK WITHIN: Experiencing an eclipse is an especially rare event. It’s worth taking a moment to look at the people around you, and also to look within yourself and be aware of what you are feeling at that exact moment. This is not just a scientific event — it’s a human event.
. 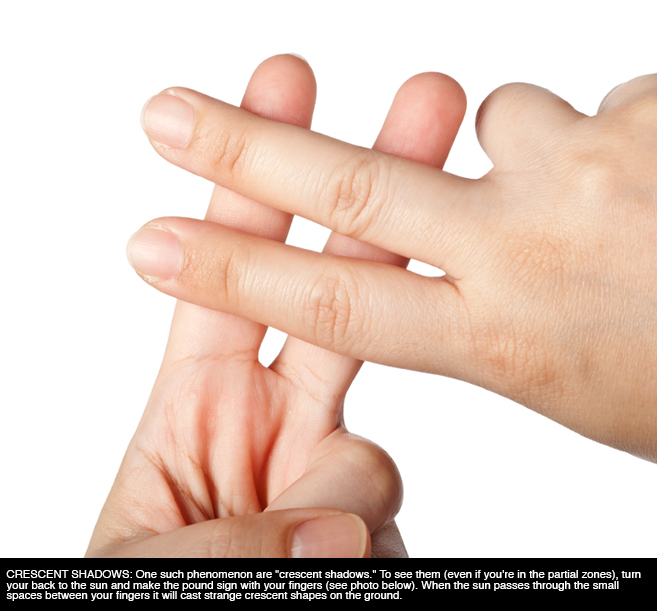