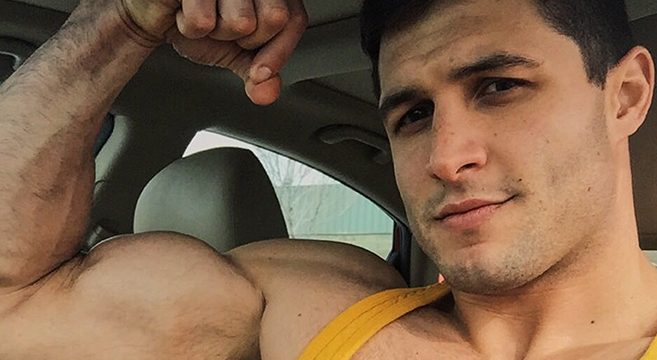 Let the name Roberto J. Portales sink into your conscious mind because there’s a good chance your unconscious mind might be screaming it later tonight in your dreams. If you’re on Instagram and you love hot guys, then there’s a pretty good chance you’ve already encountered this dreamboat. But if not, here’s a glimpse at what you’ve been missing.

Roberto is 27, was born and raised in Tampa, and began playing sports at 4-years-old. He went on to play football and wresting in high school, and graduated from the United States Military Academy at West Point in 2011. It was here where Roberto earned a B.S. in Economics and a commission as an officer in the U.S. Army. In May 2012 he deployed to Afghanistan in support of Operation Enduring Freedom, where he served as the platoon leader for a multifunctional intelligence team. During his time in Afghanistan, Roberto became serious about fitness and he completely transformed his body. During his training to become an Army Counterintelligence Special Agent he began competing professionally, and has since won numerous fitness awards.

In summer 2016 Roberto wrapped up his time in the Army and now works as an IT Sales Executive, and is also certified by the Project Management Institute (PMI) as a Project Management Professional (PMP). He now lives in Los Angeles with his boyfriend, which is concerning for me as a fellow Angelino because if he leaves his windows open at bedtime there’s a good chance he will hear me screaming his name each night.

Can’t wait to be back! #Chicago

After 4 years at West Point and 5 years as an Army Officer, today I put on the uniform for the last time. I’m so thankful to all the wonderful Soldiers, NCOs, and Officers that helped me along the way. My military service will always be the cornerstone of my life. Now, it’s off to Dallas for the next 6 months to begin my civilian career! #army #military #usarmy #armylife #captain #lastday #lastdayinuniform #thankful #grateful #usa #transition #texas #dallas #elpaso #fortbliss #thisisit #dd214

As my time in the military winds down, I find myself reminiscing. So, here’s a #TBT to when I was a cherry LT leading my platoon through the streets of Kandahar City 🇺🇸 #armylife #afghanistan #kandahar #platoon #platoonleader #army #military #middleeast #deployment #reminiscing #throwbackthursday #salute #veteran #combat #america

Instead of posting my top nine of 2015, I thought I’d go through my photos and find my favorite one of the year. Here it is from my first trip to LA this past 4th of July. Happy New Year everyone!!! #losangeles #cali #calilife #california #hollywood #hollywoodhills #caliboy #independenceday #fourthofjuly #poolparty #tbt #throwbackthursday #happynewyear #summer #sunny