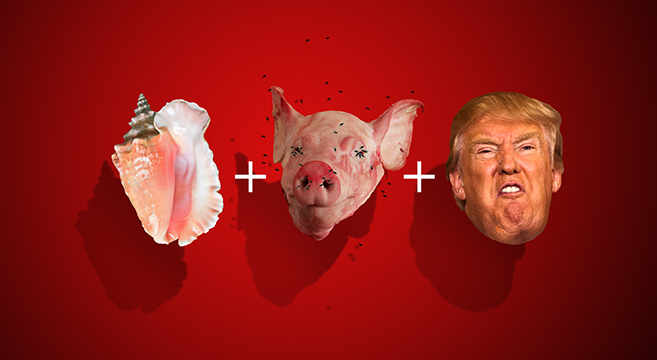 Lord Of The Lies: What William Golding’s Classic Teaches Us About Cults & The Fall Of Trump

On Friday, January 20, 2016 Donald Trump got the conch. As I watched the new President descending the steps of the Capitol to the deus for his inauguration all I could think about was William Golding’s classic 1954 novel Lord of the Flies. But instead of a group of British boys who find themselves deserted on an island in the Pacific Ocean that sends them down a dark path, it is America and the West who have officially lost control of order and morality, and are now descending into total savagery and chaos.

Golding’s novel takes place during an unspecified nuclear war when a group of 25 boys are marooned on a tropical island. Although things get off to a reasonable start with Ralph elected leader and his fastidious organization of teams for shelter-building, food-gathering, and constant maintenance of a smoke signal fire, it doesn’t take long for the group to devolve into disarray with Jack seizing control and turning the boys into savages. What began as an island of reason, peace, and hope, eventually becomes an island of impulse, disorder, and pure evil. Instead of relying on innate wisdom and critical thinking to save themselves, the boys are overtaken by Jack who promulgates a collective fear of a mythical “beast” hiding in the jungle. To appease the beast, Jack impales a pig’s head on a stick as an offering. As the flesh begins to rot and flies surround it, the pig’s head becomes known as the Lord of the Flies. Suddenly, murder, torture, pleasure and vengeance — all fueled by groupthink — become more important than civilization itself.

Golding’s allegory is rich in the broad themes which combine to form much of the human condition, with each character representing the embodiment of these varying ideas. Ralph embodies leadership and civilization. Piggy and his fire-starting glasses represents science and intellectualism. Jack signifies savagery and lust for power. Jacks’s partner in crime, Roger, represents brutal force and vengeance. While Simon embodies spirituality, compassion, and the holder of moral truth.

The novel has strong and implicit biblical parallels, with the island itself (especially Simon’s sacred retreat) being a reference to the Garden of Eden which begins as pure and becomes corrupted by man. By contrast, the Lord of the Flies pig head represents three things: 1) a physical manifestation of the Beast, 2) a symbol of evil and dark power, and 3) a supernatural totem which serves as a conduit for the Devil to communicate to the boys, as well as to activate the dark impulses within themselves (NOTE: “Lord of the Flies” is the literal translation of Beelzebub, the name of the “chief of demons” mentioned in the New Testament). And the character of Simon has strong parallels with Jesus. His character’s journey climaxing most powerfully in the novel’s most cringeworthy moment when the Lord of the Flies pig head come to life and seems to speak to Simon, warning him of the “fun” that is to come — a terrifying foreshadowing of Simon’s murder in the next chapter after he discovers the truth that the Beast is not a real creature, rather is nothing more than a reflection of the innate darkness that exists within each person. “Maybe there is a beast … maybe it’s only us,” he says. Before he is able to convey this truth to the other boys, he is brutally murdered by Jack and the other savages. His death brings forth a moral guilt that plunges the boys further into chaos.

Jack orders a manhunt to find Ralph, and Jack’s savages set fire to the jungle. Tipped off by two of the boys, Ralph gets a head start in his escape, and just as it appears there is no safe place to hide, Ralph trips and finds himself at the feet of a British soldier whose warship has arrived to investigate the massive blaze. As their rescue becomes apparent, and clarity of the full scope of what has occurred on the island sets in, the boys begin to weep and revert to their true ages.

But the most powerful symbol of the novel is the conch shell, which serves as the primary symbol of governance, order, democracy, and civilization. Whoever holds the conch holds the right to speak. But with each new threshold of immorality they cross, the boys’ descent into savagery plunges deeper and deeper, and the conch as a symbol of democracy fades away until it is eventually smashed.

So if Donald Trump’s winning the nomination for the Republican party (amidst the growing rise of neofascism and alt-right white supremacy sweeping the world) marked the official moment the Western world arrived on its own marooned island, then his election on November 8, 2016 was the final shattering of the shell. The day after his inauguration Trump wasted no time, for he had already begun setting fire to the jungle. One of his biggest fires was his executive order to repeal Obamacare which will send millions of low-income Americans back into the abyss of having no healthcare. He also instantly set ablaze all references to climate change and LGBT rights on the White House website. But as the pussy-grabber-in-chief, the biggest of all Trump’s fires was revealed yesterday when millions of women, men and children from around the world took to the streets to protest in a global Women’s March.

What began as a protest to the threats women will now face under a Donald Trump presidency quickly expanded to include all those impacted. “The rhetoric of the past election cycle has insulted, demonized, and threatened many of us — immigrants of all statuses, Muslims and those of diverse religious faiths, people who identify as LGBTQIA, Native people, Black and Brown people, people with disabilities, survivors of sexual assault — and our communities are hurting and scared,” writes the community’s organizers. “We are confronted with the question of how to move forward in the face of national and international concern and fear. In the spirit of democracy and honoring the champions of human rights, dignity, and justice who have come before us, we join in diversity to show our presence in numbers too great to ignore.”

Appropriately enough, it was William Golding himself who — when asked numerous times by women and young girls why his dystopian novel featured boys rather than girls — responded with the following: “Well, I was once a little boy — I have been a brother, a father, I am going to be a grandfather. I have never been a sister, or a mother, or a grandmother. That’s one answer. Another answer is of course to say that if you, as it were, scaled down human beings, scaled down society, if you land with a group of little boys, they are more like a scaled-down version of society than a group of little girls would be. Don’t ask me why, and this is a terrible thing to say because I’m going to be chased from hell to breakfast by all the women who talk about equality — this is nothing to do with equality at all. I think women are foolish to pretend they are equal to men, they are far superior and always have been.”

Fires require fuel in order to survive, and as Trump proved in his dark inaugural speech, the only way his grip on power can sustain itself is if he is successful in perpetuating his cult’s message of fear, and is able to keep it aflame inside the minds of his followers. And the only way to do this is with mistruths.

One of the most disturbing exhibits of this came just yesterday when Trump’s White House Press Secretary, Sean Spicer, devoted his very first White House press briefing to challenging the “false reports” that inauguration attendance was far lower than Obama’s in 2009. Not only was his briefing filled with lies, as VANITY FAIR reports, but it also marked the first time a White House Press Secretary did not take questions from reporters. What’s more, there was absolutely zero mention of the global protests that were occurring at that very second.

With that disturbing press briefing, Trump has made it explicitly clear he also has set another major fire ablaze — he has set fire to truth itself. A master of gaslighting (i.e. the ability to warp a person or group’s perception of reality), Trump has played fast and loose with the truth for his whole campaign, but to see his blatant lies being dished out in that press room was nothing short of terrifying.

Yes, there are multiple fears taking place on our island right now. The “fear of the Beast” that Trump has embedded in the minds of his blind cult following, but also the fear we have of Trump’s complete disregard for the truth. Journalists and protestors — not government — are now the most important keepers of these truths. And as we move forward into the next four years we must be strong and steadfast in making sure our fear of Trump’s revulsion for the truth does not devolve into a fear of Trump himself. The importance of this can be found in one of the most revealing conversations of all between Ralph and Piggy.

Previous post:
The Obamas Jetting To Palm Springs To Vacay With Their 2 Gay Besties In This Mayan Desert Villa Next Post:
Everything You Need To Know About The Dangerous New Gmail & Netflix Email Phishing Scams