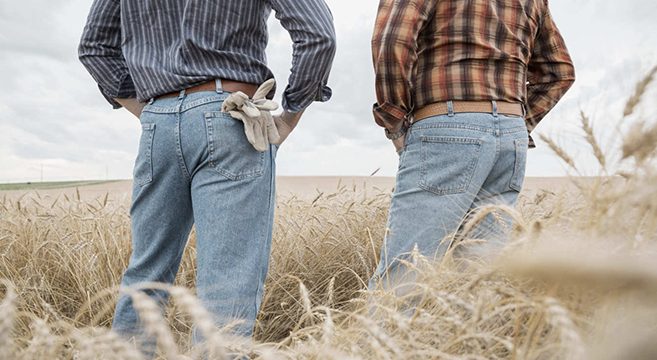 In her fascinating 2015 book Not Gay: Sex Between Straight White Men (NYU Press), author Jane Ward, a gender and sexuality professor at University of California, Riverside, explores the phenomenon of straight men who have sex with other straight men. She reveals how it’s much bigger than the usual hotbeds where straight guys tend to have the most sex with each other (i.e. frat boys, military, and prisons). Her research found the phenomenon to be growing the most in rural and suburban areas. “A lot of men have sex with other men but don’t identify as gay or bisexual,” writes Jesse Singal of New York Magazine. “A subset of these men who have sex with men, or MSM, live lives that are, in all respects other than their occasional homosexual encounters, quite straight and traditionally masculine — they have wives and families, they embrace various masculine norms, and so on. They are able to, in effect, compartmentalize an aspect of their sex lives in a way that prevents it from blurring into or complicating their more public identities. Sociologists are quite interested in this phenomenon because it can tell us a lot about how humans interpret thorny questions of identity and sexual desire and cultural expectations.”

In an interview with Jesse Singal entitled Why Straight Men Have Sex With Each Other, Singal asks Ward: “Another rationale for homosexual activity among [straight] men was this idea of men turning to sex with men because there were fewer obligations — no pressure, no stress, no romance. Can you just talk about that for a minute?” Ward replies, “Yeah, well, that is an argument that, again, psychologists and psychobiologists have commonly made and those kinds of arguments, I think, trickle down into the broader culture so that men themselves know which claims have legitimacy. If you can get a straight man to talk to you about why he is having sex with men, it’s very likely that he’s going to draw from a small set of acceptable narratives about why straight men do things like that, and I think that’s a really common one, you know, the narrative of constraint — Well, I’d rather be having sex with a woman, but there are no women available, or, Women are too complicated — this kind of thing. But I don’t buy that. That’s not to say that I think those straight men know the real reason — I think often they don’t know. I guess we don’t have language that circulates in mainstream culture that would help straight men make sense of or explain their sexual encounters with other men, whereas straight women, when they have sexual encounters with other women, have an array of socially acceptable narratives that they can draw on. ‘Well, I just think women are hot — they’re beautiful, but of course I’m straight.’ They can say almost anything and get away with it, but straight men have very few resources for understanding that part of their sexuality, and so the main thing, the first and foremost thing they do is to just understand it as not sexual at all and just to not think about it, and to the extent they think about it as sexual, yeah, then all of these narratives about deprivation or constraint kick in.” You can read the full interview at New York Magazine.

NY Mag also profiles the research of Tony Silva of the University of Oregon. In his research paper entitled Bud-Sex: Constructing Normative Masculinity among Rural Straight Men That Have Sex With Men (November 2016), Silva interviewed several men whom he found on men-for-men (MSM) casual-encounters boards on Craigslist. These men were from rural areas, with the majority being over 50 and identifying as exclusively or mostly straight. Silva’s abstract reads as follows:

“This study draws on semistructured interviews with 19 white, rural, straight-identified men who have sex with men to understand how they perceive their gender and sexuality. It is among the first to use straight men’s own narratives, and helps address the underrepresentation of rural masculinities research. Through complex interpretive processes, participants reworked non-normative sexual practices — those usually antithetical to rural masculinities — to construct normative masculinity. Most chose other masculine, white, and straight or secretly bisexual men as partners for secretive sex without romantic involvement. By choosing these partners and having this type of sex, the participants normalized and authenticated their sexual encounters as straight and normatively masculine. The participants engaged in bud-sex, a specific type of male–male sex that reinforced their rural masculinity and heterosexuality. The married men framed sex with men as less threatening to marriage than extramarital sex with women, helping to preserve a part of their lives that they described as central to their straightness. The results highlight the flexibility of heterosexuality; the centrality of heterosexuality to normative rural masculinity; how similar sexual practices carry different meanings across contexts and populations; and the social construction of masculinities and sexualities by age, race, gender, time period, and place.” (DOI: 10.1177/0891243216679934) You can learn more about what Silva discovered in his research at New York Magazine.

Most of these men find each other with men-for-men (MSM) casual-encounters boards on Craigslist, but a new app for these men is growing in popularity. The BRO™ app’s description on iTunes reads: “The Bro app – BRO™ – is the new social app just for men for friendship, bromance, dating, & more! BRO™ goes beyond using labels, and is for men that are interested in meeting other guys — it’s as simple as that. Just sign up, and start looking for new Bros!” You can learn more about BRO™ on iTunes. (Photo credit: Hero Images Inc./Getty Images/Hero Images via NYmag)