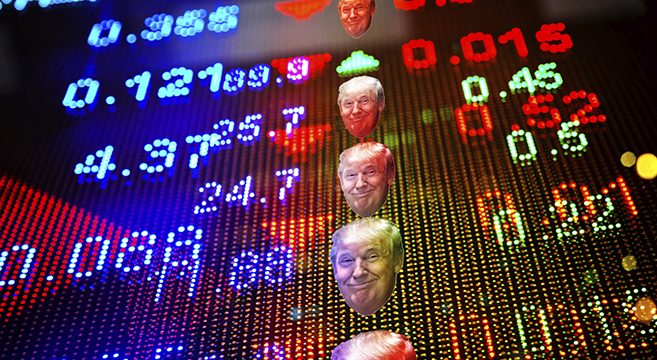 In March 2014 Steve Kroft of 60 Minutes aired a fascinating exposé of how high-frequency computerized stock trading has rigged the stock market. The dubious scheme was so undetectable in size it might have gone unnoticed had it not been for one Canadian banker named Brad Katsuyama who was working at the Royal Bank of Canada‘s New York office where he was RBC’s Global Head of Electronic Sales and Trading. “While at RBC, he noticed that placing a single large order that can be fulfilled only through many different stock exchanges was being taken advantage of by predatory stock scalpers. Scalpers, noticing the order would not be able to be fulfilled by one single exchange, would instead buy the securities on the other exchanges, so that by the time the rest of the large order arrived to those exchanges the scalpers could sell the securities at a higher price. All these events would happen in milliseconds not perceivable to humans but perceivable to computers. He instead led a team that implemented THOR, a securities’ order-management system where large orders are split into many different sub-orders with each sub-order arriving at the same time to all the exchanges through the use of intentional delays.” (Wikipedia)

Katsuyama’s discovery inspired celebrated author Michael Lewis to write his non-fiction book Flash Boys, which explains the world of high-frequency trading (HFT) in the financial markets. Katsuyama eventually left the RBC in 2012 to found The Investors Exchange (IEX), a new type of stock exchange that counteracts unfair nanosecond head-starts, and provides a more fair and equal trading ecosystem. Because of Katsuyama’s discovery, the FBI, the U.S. Securities and Exchange Commission, the U.S. Justice Department and the Attorney General of New York State all have investigations underway into the dark world of predatory stock scalpers.

Success in the 21st century stock market all comes down to nanoseconds (seconds are soooo 20th century). So in the age of Trump it was only a matter of time before algorithmic trading software was developed that would respond to Trump’s business-related tweets. Traders have noticed a 10-second gap between Trump’s business-related tweets and a direct impact on the stock market. For example, Trump’s recent “cancel the order” tweet about Boeing’s $4 billion price tag for the new atomic-proof Air Force One sent Boeing’s stocks through the floor. The company lost $1 billion before the end of that day, but the company’s stock price rebounded within 24 hours. Still, that kind of yo-yo effect on a company as stable as Boeing opens up a highly profitable new era for high-frequency traders.

Eamon Javers of CNBC writes, “Efrem Hoffman, founder of a market analysis firm called Running Alpha, said Trump’s tweets represent a new source of market information for those willing to study them and identify patterns. ‘One specific strategy that I am working on is looking at tweets that come from Trump’s Android phone — as these have been shown to reflect his personal beliefs and convictions,’ Hoffman said. ‘Somewhat more unfiltered than tweets coming from other mobile devices that reflect the opinions of his colleagues/staff.’ Hoffman said he is analyzing the sequencing of Trump’s tweets in terms of volatility between Trump’s episodes of anger or jubilation, and cross referencing those episodes with keywords associated with specific industries of policy categories. He said he is looking at the sentiment of Trump’s followers and how the tweets are received as a possible measure of market player uncertainty. ‘This type of indicator can be used along with the VIX curve conviction levels to identify changes in market trends on different scales,’ Hoffman said. One pattern he has identified so far: When market sentiment is positive, Trump’s positive comments — no matter how vague — tend to get more traction in the market.” (Image via U.S News)

Previous post:
Darth Vader & The Jaramarana Switch: The Huge Psychological Shift That Kids Always Make At Age Of 10 Next Post:
Meet The World’s Sexiest Veterinarian From Calabasas Who Can Cure Your Pussy & Tame Your Snake