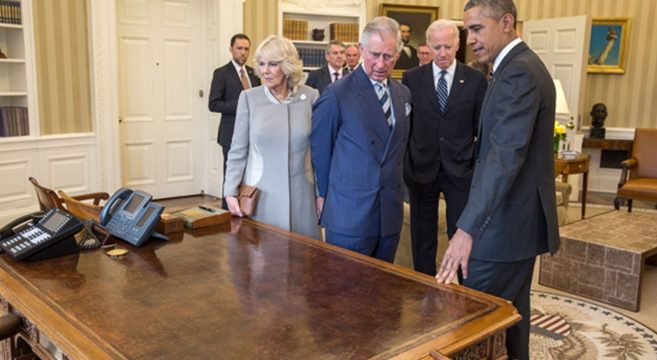 When British explorer Sir John Franklin departed England in 1845 with his ship’s crew in search of the fabled Northwest Passage through the Canadian Arctic, he had no idea it would be his life’s final journey. Seven years later a five-ship squadron was sent out to find the missing ship and crew, and one of these five ships was the HMS Resolute. Four of these five ships would eventually became stuck in ice and had to be abandoned, including the HMS Resolute in 1845. Somehow, the crews of all four of the abandoned ships were rescued by the fifth ship (the HMS North Star), and with a little help from two other relief ships the crew members were all safely returned to England.

Other British and American rescue crews would be sent through the years to find Franklin, but to no avail. It wasn’t until 1854 when Scottish surveyor Dr. John Rae, who was working for Canada’s Hudson Bay Company at the time, learned of the fate of Franklin and his crew. After speaking with Inuit hunters and finding timber from the ship, as well as letters and human remains, it was learned that Franklin’s ship wintered in 1845-46 on Beechey Island, and the ship became locked in ice in September 1846. A note found on the island revealed that Franklin died there on June 11, 1847, and all of the crew eventually perished from tuberculosis, scurvy, and pneumonia. In 1997, forensic analysis of the crew’s remains found knife marks on most of the bones, indicating many of the crew fell victim to cannibalism by fellow crew members.

In 1855, one year after Dr. John Rae learned of the tragic fate of Franklin and his crew, an American whaling ship from Connecticut led by Captain Buddington came upon the HMS Resolute off the shore of Baffin Island — an astonishing 1200 miles away from where it was abandoned. The whalers described to a New York magazine what it was like to enter the ghostly Resolute: “Finally, stealing over the side, they found everything stowed away in proper order for desertion — spars hauled up to one side and bound, boats piled together, and hatches closed. Everything wore the silence of the tomb. Finally reaching the cabin door they broke in, and found their way in the darkness to the table. On it they accidentally turned on a box of lucifer matches; in a moment one was ignited, the glowing light revealed a candle; it was lit and before the astonished gaze of these men exposed a scene that appeared to be rather one of enchantment than reality. Upon a massive table was a metal teapot, glistening as if new, also a large volume of Scott’s family Bible, together with glasses and decanters filled with choice liquors. Near by was Captain Kellett’s chair, a piece of massive furniture, over which had been thrown, as if to protect this seat from vulgar occupation, the royal flag of Great Britain.”

The Resolute was brought to a shipyard in Brooklyn, fully restored by the U.S. government at a cost of $40,000 ($1,000,000 in 2016 currency), and was later sailed to England where it was presented to Queen Victoria on December 13, 1856 as a token of comity. When news of the gift made the press, the entire country was blown away by the gesture of good will and the story became a sensation. The wife of missing Sir John Franklin asked Queen Victoria if the Resolute could be sent back to the Arctic to search for her husband, but details of Franklin’s death (as learned by Dr. John Rae) arrived at roughly the same time as the gift of the Resolute itself, so the Queen officially ended the search for Franklin and put the Resolute back into Navy service for the next 20 years. The Canadian Arctic settlement of Resolute was later named in honor of the ship. In 1879 the HMS Resolute was decommissioned and disassembled, and Queen Victoria had three desks made of the ship’s timber. One year later in 1880 Queen Victoria presented U.S. President Rutherford B. Hayes with one of these desks (the other two remain at Buckingham Palace in the Queen’s private residence). Now known as the iconic Resolute Desk, a plate on the front of the desk reads as follows:

“H.M.S. ‘Resolute’, forming part of the expedition sent in search of Sir John Franklin in 1852, was abandoned in Latitude 74º 41′ N. Longitude 101º 22′ W. on 15th May 1854. She was discovered and extricated in September 1855, in Latitude 67º N. by Captain Buddington of the United States Whaler ‘George Henry’. The ship was purchased, fitted out and sent to England, as a gift to Her Majesty Queen Victoria by the President and People of the United States, as a token of goodwill & friendship. This table was made from her timbers when she was broken up, and is presented by the Queen of Great Britain & Ireland, to the President of the United States, as a memorial of the courtesy and loving kindness which dictated the offer of the gift of the “Resolute’.” 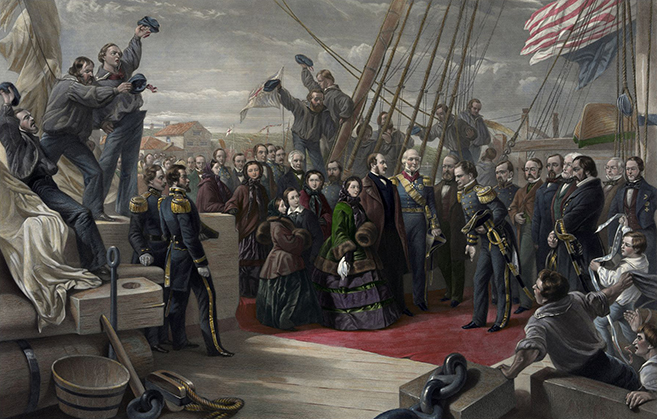 Queen Victoria visits Resolute, 16 December 1856, after its rediscovery and return to the British by the Americans (source: Wikipedia). 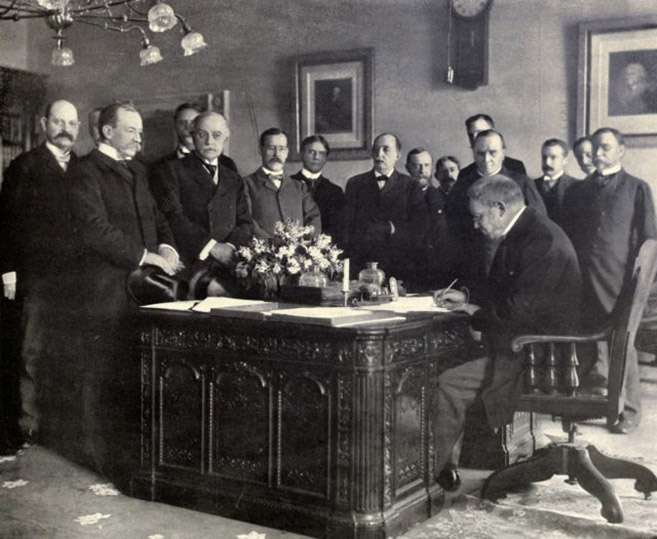 Jules Cambon, the French Ambassador to the United States, signing the memorandum of ratification on behalf of Spain in 1899 (source: Wikipedia). 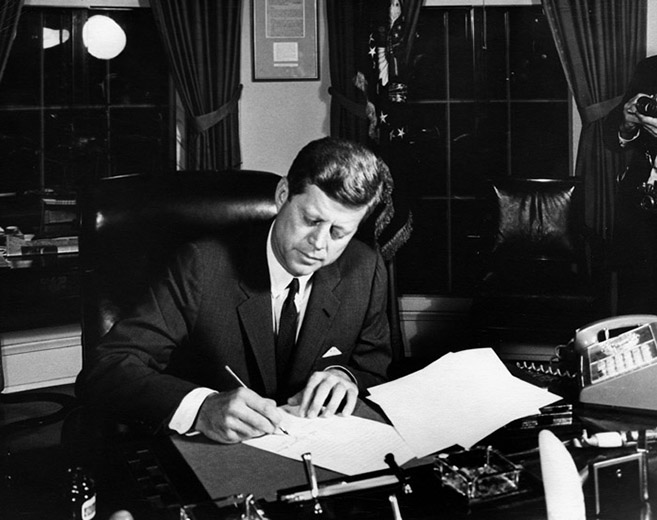 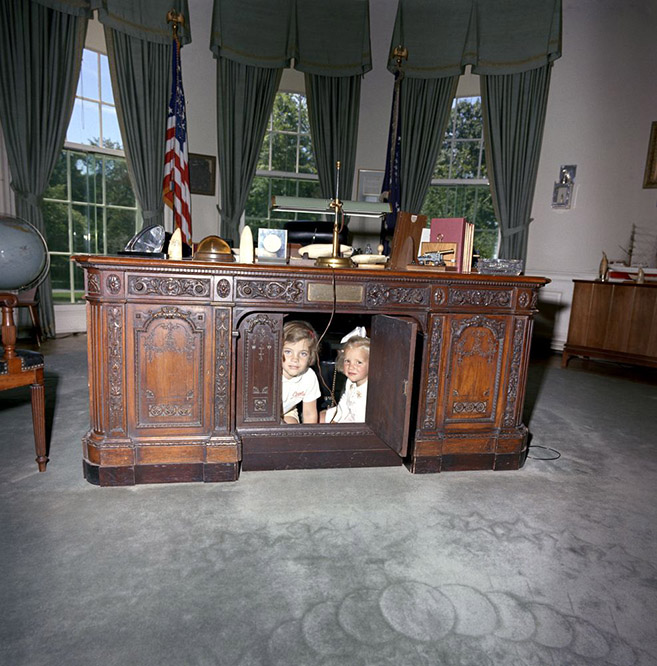 Caroline Kennedy and Kerry Kennedy beneath the desk in 1963 (source: Wikipedia). 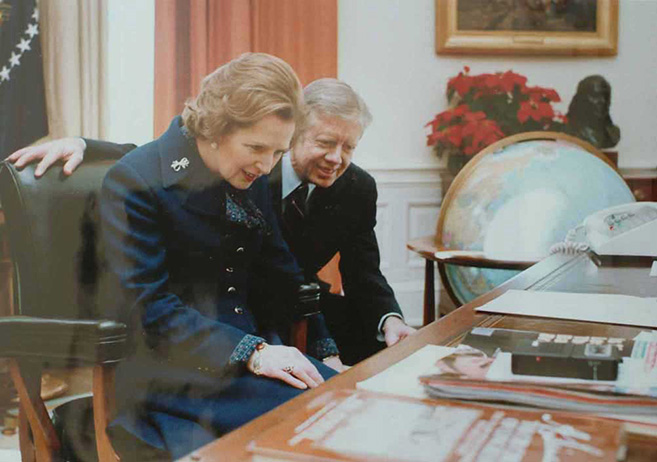 British Prime Minister Margaret Thatcher reads the inscription on the front of the desk in 1979, accompanied by President Jimmy Carter (source: Wikipedia). 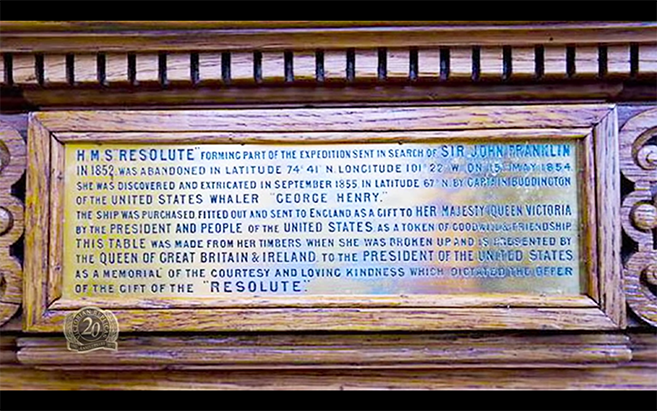 The inscription on the front of the President’s Resolute Desk (image via YouTube). 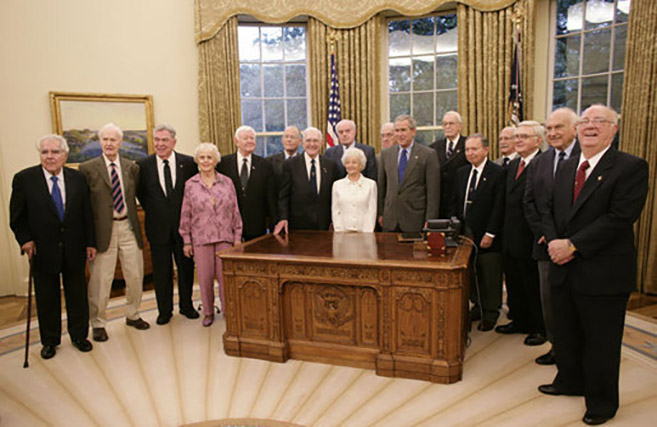 President George W. Bush meets with the members of the Supreme Headquarters Allied Expeditionary Force/Headquarters European Theater of Operations U.S. Army Veterans Association Friday, Oct. 6, 2006, in the Oval Office at White House. The group was organized in 1985 as a way to pay tribute to the memory of their supreme commander, Dwight D. Eisenhower, and their visit to the White House marks their 21st and final reunion gathering. White House photo by Paul Morse. 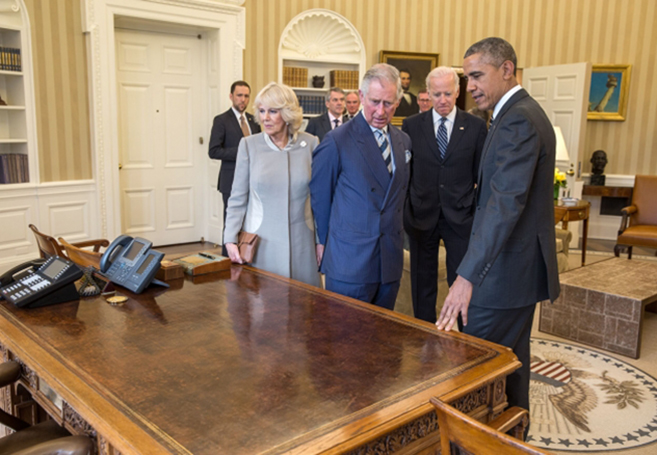 President Barack Obama and Vice President Joe Biden show the Resolute Desk to Charles, Prince of Wales and Camilla, Duchess of Cornwall, prior to a meeting in the Oval Office, March 19, 2015. (Official White House Photo by Pete Souza) via WhiteHouse.gov 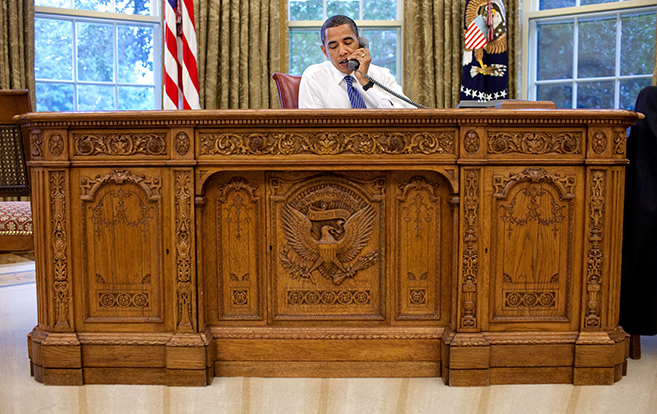 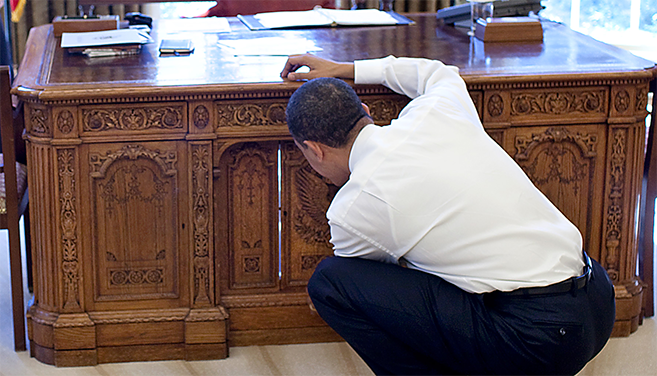 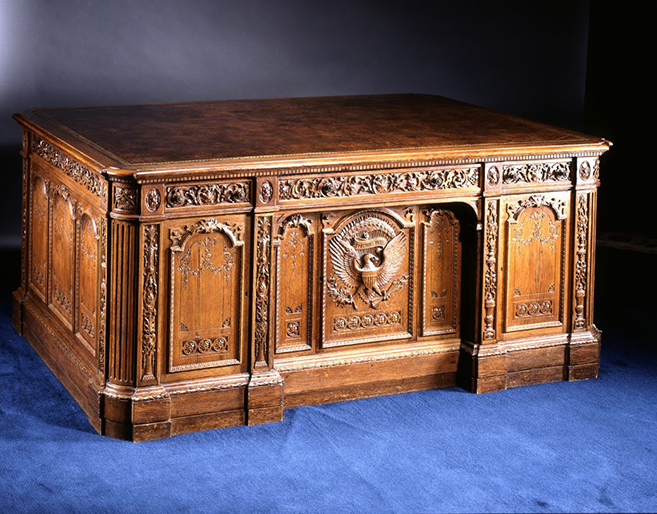