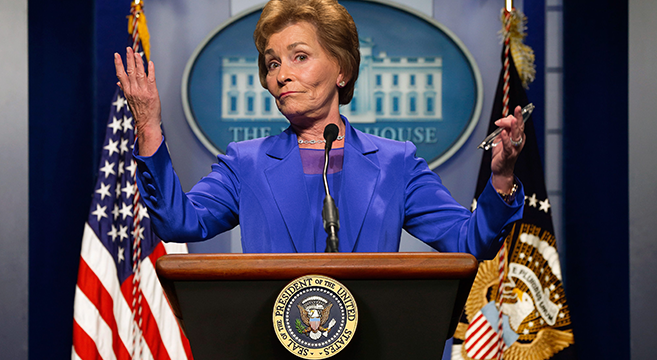 In his post-election episode of Real Time this past Friday night, host Bill Maher put something on the table that has a lot of people thinking, “Hmmm, this is so crazy it might work!” In referencing Trump supporters’ adoration of the reality star’s wealth and outsider status, Maher posited the renegade theory that Judge Judy Sheindlin would be the Democrats’ ultimate political antidote in 2020. He offered up the idea with tongue only half-planted in cheek, because when Trump himself announced his candidacy in June 2015, the laughter could be heard in living rooms and anchor desks around the world. When Trump won the election last Tuesday, we officially entered a world where reality had finally eaten reality. So here are the reasons why Judge Judy could actually win:

1. SHE’S BEYOND RICH: Trumpsters were smitten by the Donald’s success, and Democrats can play that game too. Judge Judy Sheindlin is a centimillionaire, with a net worth in 2016 of more than $290 million according to Forbes. She is by far the wealthiest woman in television, with a salary of $47 million per year (and that was before her 2015 contract extension). Daniel Bukszpan of FORTUNE writes: “[Sheindlin] only works 52 days out of the year, according to The Washington Post. This puts her close to earning a cool million dollars for every day that she upbraids unemployed ne’er-do-wells who have failed to reimburse their baby mamas for overdue cell phone bills in a timely fashion.” That gives her plenty of spare time to hit the campaign trail beginning June 2019.

2. SHE’S A BALL-BUSTER: Who better to make GOP Senators and members of Congress shit their pants than Judge Judy herself? Just imagine in January 2021 when she would submit her budget for approval. I can picture the thoughts in Senator Mitch McConnell’s head as he pores over the budget details: “She wants to double the minimum wage, make healthcare free, and boost taxes on the wealthy?! That’s nuts! But I’d like to keep my own nuts so I’d better get this approved right away.”

3. SHE’S WHIP SMART: Judge Judy has written seven books, including the bestseller, Don’t Pee on My Leg and Tell Me It’s Raining. And as Natalie Robehmed writes in Forbes, “The Brooklyn native was the only woman in the first year of her law school class of 126 at American University.” Sheindlin passed the New York state bar examination in 1965 and became a prosecutor in the family court system. In 1982 New York City Mayor Ed Koch appointed her as a judge, first in criminal court, then later as Manhattan’s supervising family court judge in 1986 (Wikipedia). Known for her non-nonsense attitude, Sheindlin was the subject of a 60 Minutes profile in 1993 that resulted in an offer for a syndicated show.”

4. SHE’S A CHAMPION OF WOMEN’S EMPOWERMENT: Sheindlin is the creator, director, and spokesperson for an alliance designed to nurture and strengthen women, entitled Her Honor™ Mentoring Program. The program’s mission is to provide a platform for young women to reach their full potential, strengthen their practical skills in order to realize a life full of promise and reinforce the importance of college education and ultimately gain a meaningful profession. (Wikipedia)

5. SHE WOULD CRUSH TRUMP LIKE A PAPER BAG: Can you imagine the three Presidential debates of Sheindlin vs. Trump? The Democrats will need to fight fire with fire in 2020, and there’s nobody better prepared to bitchslap Trump than Judge Judy. She could build her own tower out of the number of douchebags like Trump that she’s taken down in her career as a lawyer and judge over the course of 51 years and counting. But the best part — how delicious would it be to watch Judge Judy take on Vladimir Putin. “Hey Vlad, I’m speaking!!!”
.

Previous post:
The Pain Of Pulse & Pence: Why I Give Up On The War Against Institutionalized Religious Homophobia Next Post:
President Obama Names Bruce Springsteen & Ellen DeGeneres As Recipients Of Medal Of Freedom