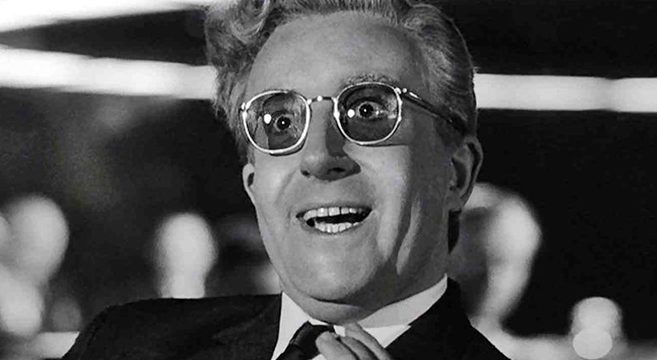 Welcome To Dr. Strangelove: These Are The Nightmarish Things That Will Happen Beginning January 21st

What was unthinkable yesterday is now a terrifying reality. Donald Trump will be the next President of the United States beginning January 21, 2017. As if that’s not terrifying enough, the Republicans have 100% control of the Senate and the House of Representatives. There is next to nothing that will stop the new government from activating most of its Orwellian policies. The following is a list of what will happen beginning January 21st.

OBAMACARE: Guaranteed to be scrapped.
PLANNED PARENTHOOD FUNDING: Guaranteed to be scrapped.
SCHOOLS & MILITARY BASES TO BECOME GUN ZONES: Likely to not pass through Congress.
SYRIAN REFUGEE RESETTLEMENT PROGRAM: Guaranteed to be scrapped.
NEW ULTRA-CONSERVATIVE PRO-LIFE SCOTUS JUDGE: Guaranteed to be pass.
GAY MARRIAGE: Very strong chance it will be repealed within a few years.
TRANS RIGHTS: There will be zero Federal recognition that these people even exist.
GAY GOV’T EMPLOYEES & GAY GOV’T CONTRACTORS: Allowed to be fired.
ANTI-LGBT IMPACT: Orwellian to say the least (READ FULL BREAKDOWN HERE)
TAX CUTS FOR UPPER 1% AND ELITES: Guaranteed to pass.
DEFENSE SPENDING: Guaranteed to skyrocket.
THE MEDICAID PROGRAM: Will be dumped onto state authority where it will bleed dry.
RIGHT-WING MEDIA: Business as usual.
LEFT-WING MEDIA: Prepare for a massive tsunami of extreme-left propaganda unlike anything before.
GUANTANAMO PRISON: Major expansion.
CLIMATE CHANGE ACCORDS: Guaranteed to be scrapped.
FINANCIAL DEREGULATION: 100% deregulation. Wall Street will be let loose from its shackles.
CLEAN ENERGY INVESTMENT: Zero.
FOSSIL FUEL INDUSTRY: 100% deregulation, and full release of $50 trillion in shale energy, oil reserves and natural gas on federal lands, in addition to hundreds of years of coal energy reserves.
CHANCE OF NUCLEAR WAR: Significantly much higher.

Jonathan Chait of New York Magazine writes: “Never in my lifetime has the United States seen a period of darkness like the one that lies ahead of us. But we have seen periods of darkness before — segregation, McCarthyism, the internment of the Japanese, the Civil War, slavery. The American story is fitful progress punctuated by frequent reversals, some of which appeared at the time like they would last forever. None of them did.” He goes on to explain why he chooses to stay in America to help save it, as opposed to moving. But some states are already weighing the possibility of seceding from the United States. Katherine Reynolds Lewis of FORTUNE magazine explains more HERE, and USA Today explains more HERE.

Well known Republican columnist Andrew Sullivan — who never supported Trump, and last month said he would vote for Clinton — closed his column entitled The Republic Repeals Itself (which he published this morning at 2:46am ET) with the now ominous words from George Washington’s Farewell Address, which Washington wrote near the end of his second term as President, before he retired to his home in Mount Vernon. Originally published in David C. Claypoole’s American Daily Advertiser on September 19, 1796, under the title The Address of General Washington To The People of The United States on his declining of the Presidency of the United States:
.

The alternate domination of one faction over another,
sharpened by the spirit of revenge, natural to party dissension, which in different ages
and countries has perpetrated the most horrid enormities, is itself a frightful despotism.
But this leads at length to a more formal and permanent despotism. The disorders and miseries,
which result, gradually incline the minds of men to seek security and repose in the absolute power
of an individual; and sooner or later the chief of some prevailing faction, more able or more
fortunate than his competitors, turns this disposition to the purposes of his own elevation,
on the ruins of Public Liberty.

.
Sullivan closes with this: “A country designed to resist tyranny has now embraced it. A constitution designed to prevent democracy taking over everything has now succumbed to it. A country once defined by self-government has openly, clearly, enthusiastically delivered its fate into the hands of one man to do as he sees fit. After 240 years, an idea that once inspired the world has finally repealed itself. We the people did it.”
.

Previous post:
Watch As Malcolm Gladwell Explains Why Donald Trump Will Likely Be Behind Bars Within 12 Months Next Post:
Shakespeare On Trump’s Immorality & The Hypocrisy of Evangelicals: “We Become The Masks We Wear”