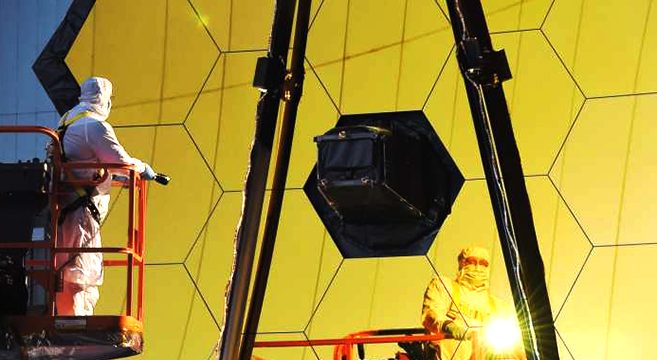 When the James Webb Telescope launches within two years, it will make the Hubble Telescope look like a run-down rusty clunker in your grandpa’s backyard. The largest space telescope ever constructed, the Webb took 20 years to construct, and yesterday NASA held a press conference to announce the Webb successfully passed its most important milestone to date — the center-of-curvature pre-tests. John Mather is an astrophysicist and senior project scientist for the Webb Telescope, and he said, “Today, we’re celebrating the fact that our telescope is finished, and we’re about to prove that it works. We’ve done two decades of innovation and hard work, and this is the result — we’re opening up a whole new territory of astronomy.”

What makes the Webb so revolutionary is its ability to see in infrared. Earth-based telescopes are drowned in contaminating infrared heat from the Earth’s surface, and the Hubble is contaminated by its own infrared heat. The Webb will be positioned in what’s known as the Lagrange Point 2 — the exact point behind the Earth from the Sun’s perspective, at a temperature close to absolute zero. The Webb’s tennis court-sized sun shield will protect the Webb and its gold mirror array from the Earth’s and the Sun’s infrared heat, allowing the Webb to see an object as small as a bumblebee from a Moon’s distance away — in both reflected light and in the heat the bee’s body is radiating. And the surface of the Webb’s array of 18 gold hexagonal mirrors is so flat that if you scaled up the array to the width of the United States the hills and valleys of irregularity would measure only a few inches in height.

The Webb also happens to be a time machine, able to peer back over 13.5 billion years to see the first stars and galaxies forming out of the darkness of the early universe. This unprecedented ability will allow astronomers to compare the faintest, earliest galaxies to today’s grand spirals and ellipticals, helping us to understand how galaxies assemble over billions of years. The Webb will be able to see right through and into massive clouds of dust that are opaque to visible-light observatories like Hubble, where stars and planetary systems are being born. It took over 1200 skilled scientists, engineers and technicians from 14 countries (and more than 27 US states) to build it. It is a joint effort of NASA, The European Space Agency, and the Canadian Space Agency. You can learn more at JWST.nasa.gov.
.
[xyz-ihs snippet=”webb”]