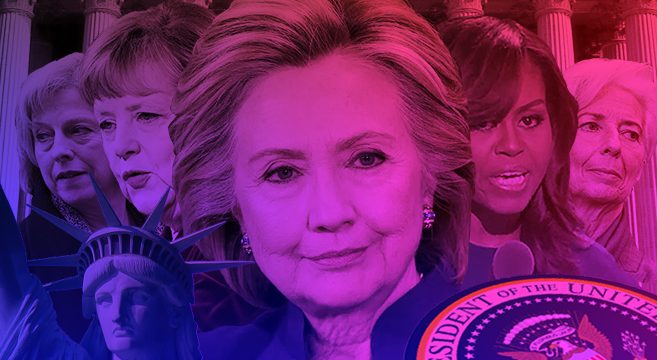 In the new book Broad Influence: How Women Are Changing The Way America Works, author Jay Newton-Small explains how when women reach a “critical mass” of power (i.e. between 20-30% of representation) within institutional power spheres and decisional bodies, change and progress begin to skyrocket. In an interview with Marketplace, Newton-Small says the idea for the book came from the speed with which new legislation was getting passed in the Senate as soon as more women Senators began to get elected. “The idea for the book came about two years ago when I was covering the Senate. The women of the Senate had reached 20%, and it was the first time they were at 20 percent. They really, really batted above their weight. They ended up producing 75% of the major legislation that passed the Senate that session. So I started researching this idea but it turns out it’s pretty widespread.” You can watch Newton-Small’s interview with PBS anchor Judy Woodruff below.

2016 will be one of the most historic years in politics: It marks the potential for the first female President of the United States, and the 100th anniversary of the first woman elected to Congress. Additionally, in 2016, single women will be one of the most pivotal voting groups heading into the general election, being courted by both Democrats and Republicans. At the centennial of the first woman elected to Congress (which was three years before women legally earned the right to vote), their presence and influence in Washington has reached a tipping point that affects not only the inner workings of the Federal Government, but also directly influences how Americans live and work. Never before have women been represented in such great numbers in the Supreme Court, both chambers of Congress, and in the West Wing. And this is just America. Around the world, women are rising to the most powerful positions in global geopolitics, business, and other halls of power. From Theresa May becoming the new PM of the UK’s post-Brexit era, to Christine Lagarde taking over the reigns of the International Monetary Fund — it’s no coincidence that women are thrust into power in the most challenging of times. In scientific terms this phenomenon is known as The Glass Cliff Theory. As soon as a woman shatters a glass ceiling, history has shown us there is a very high chance she will quickly find herself facing a challenge that proved too frightening for male leaders to face.

Some of the best known examples of Glass Cliff female power thrusts are: the 1993 Canadian election of PM Kim Campbell following Brian Mulroney’s abysmal approval ratings, General Motors’ 2014 hiring Mary Barra as CEO in the wake of a daunting mountain of recalls, Iceland electing a female leader after the 2008 economic collapse triggered by catastrophic male-dominated financial speculation, The New York Times appointing Jill Abramson as Editor-in-Chief in 2011 to steer it through the most tumultuous period in the newspaper’s history, etc.

So why do female leaders shine so spectacularly in times of crisis? From an evolutionary perspective, the female brain is far more superior at multi-tasking than its male counterpart. Neuroscience has found more than 100 gender differences between the male and female brain, but the powerful multi-tasking ability of the female brain is perhaps the most evolutionarily advantageous of all. Gregory L. Jantz Ph.D. of Psychology Today writes, “Male brains utilize nearly seven times more gray matter for activity while female brains utilize nearly ten times more white matter. What does this mean? Gray matter areas of the brain are localized. They are information- and action-processing centers in specific splotches in a specific area of the brain. This can translate to a kind of tunnel vision when they are doing something. Once they are deeply engaged in a task or game, they may not demonstrate much sensitivity to other people or their surroundings. White matter is the networking grid that connects the brain’s gray matter and other processing centers with one another. This profound brain-processing difference is probably one reason you may have noticed that girls tend to more quickly transition between tasks than boys do. The gray-white matter difference may explain why, in adulthood, females are great multi-taskers, while men excel in highly task-focused projects.”

Jantz also highlights another difference between the structures of the female vs. the male brain. “Females often have a larger hippocampus, our human memory center. Females also often have a higher density of neural connections into the hippocampus. As a result, girls and women tend to input or absorb more sensorial and emotive information than males do. By ‘sensorial’ we mean information to and from all five senses.” This is major reason why women leaders tend to fight harder for social issues than men.

Suzanne Nossel of Foreign Policy writes, “Another prospect that seems obvious but could have far-reaching implications is that a group of global female leaders will probably make the welfare and concerns of women more central to global policymaking. Here Hillary Clinton could well lead the charge. More than 20 years ago, she set out her bold vision on unfriendly territory in Beijing, during a historic speech at the U.N.’s Fourth World Conference on Women in which, speaking as first lady, she proclaimed that women’s rights were human rights, and vice versa. As secretary of state, she converted this lofty vision into a policy blueprint, arguing that the advancement and status of women was not just a moral cause, but also a matter of national security. She catalyzed programs in Afghanistan, Yemen, and Guatemala — including a 24-hour court in the latter’s capital that provides victims of domestic violence not just access to justice, but also health services, psychological counseling, and safe housing. Clinton also entrenched women’s rights within the bureaucracy, elevating the State Department’s Office of Global Women’s Issues, expanding its budget, and creating a fund to support women’s rights projects around the world. She also championed women’s rights at the U.N., including a campaign to give millions of women access to healthy and environmentally sound clean cookstoves, the adoption of U.N. Security Council Resolution 1888, which established a special representative focused on sexual assault of women and children in conflict zones, and created U.N. Women, a dedicated global agency.”
.
[xyz-ihs snippet=”FirstGents”]