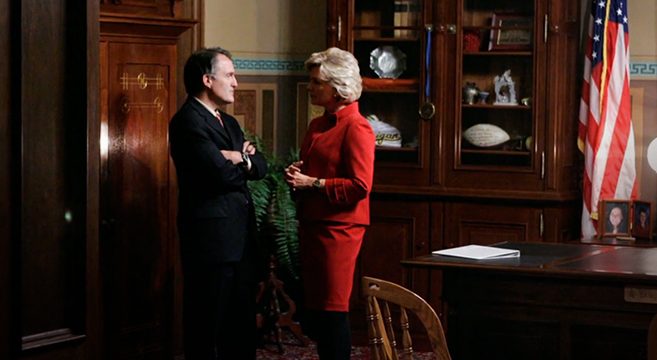 The Greatest Gentlemen’s Club Of All Time: Meet The Six First Gentlemen Of American Politics

There are currently six First Gentlemen in the United States — husbands whose wives hold some of the most powerful offices in American politics. In her terrific new feature for CBS Sunday Morning, correspondent Faith Salie introduces us to some of these gents, including Rhode Island’s First Gentleman, Andy Moffit, husband of Governor Gina Raimondo. We also meet former First Gentleman, Dan Mulhern, whose wife, Jennifer Granholm, served two terms as governor of Michigan. While sharing his thoughts on the role of a First Gentleman, Mulhern, who is currently a lawyer and teacher at UC Berkeley, couldn’t help but get a little bit emotional as he looks back on his wife’s career and praises her enormous accomplishments. You can watch the interview in full above, as well as the extraordinary PBS documentary series, MAKERS: Women In Politics, below. The second installment of the series takes us on a historical journey of women in American public office who were “firsts” in their fields. From the first woman elected to Congress in 1916 to a young woman running for Detroit City Council in 2013, the documentary explores the challenges confronting American women in politics. Trailblazing leaders like Hillary Clinton, Senator Barbara Mikulski, Olympia Snowe, the youngest Republican woman ever elected to the House of Representatives, and Shirley Chisholm, the first African-American woman to serve in Congress, provide a backdrop for younger women like Rashida Tlaib, the first Muslim-American woman elected to the Michigan House, and Raquel Castaneda-Lopez, who chronicles her run for Detroit City Council. (Sources: CBS Sunday Morning, MAKERS: Women In Politics on YouTube, Charlie Rose)
.
[xyz-ihs snippet=”FirstGents”]