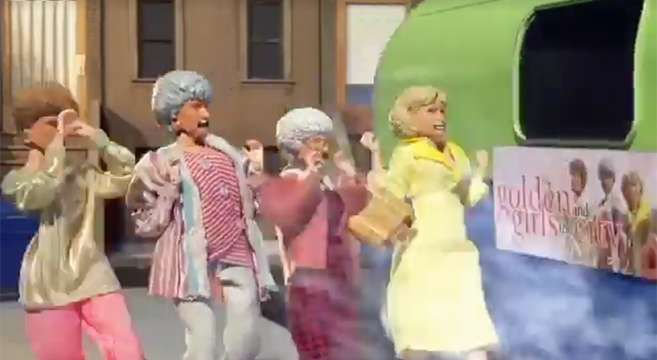 It’s easy to make fun of Sex and the City (1998-2004), but the groundbreaking series revolutionized much more than television alone — it also empowered and continues to empower generations of women and LGBT who live under repressed and masochistic cultural regimes, and who find themselves trapped in confines of subjugation and prejudice. Women and LGBT tell of countless Sex and the City viewing parties held in locked rooms across Iran, Afghanistan, Yemen, and beyond — with DVDs being passed under burqas and in dark back alleys. What’s merely light entertainment for Western audiences is far more important for those living in the darkest corners of the world — it provides vital fuel of inspiration for people who dream of living a better life in a country where the are fully liberated, and free from judgement or prosecution simply for embracing their sexuality.

Another series which inspires millions around the world in the very same way is The Golden Girls (1985-1992), which demonstrated how one can build a “modern family” in his or her golden years, and continue to live life to the fullest right through the the final act. So when I came across this ADULT SWIM parody of Sex and The City mashed with The Golden Girls I couldn’t help but laugh out loud.

If all this Sex and the City talk makes you reminisce for the series, you can take comfort that the show’s superstar lead, Sarah Jessica Parker, is in many ways living a parallel real-life version of her character, Carrie Bradshaw’s onscreen life. Parker’s Instagram account, as W Magazine‘s Emilia Petrarca writes, “is hilarious, personable, and of course, very fashionable.” Take a glance at some of Sarah’s best Instagram hits below, and see them all at Sarah Jessica Parker on Instagram.

That’s me hanging for a moment in the legendary @harvardlaw library. Moments before addressing the graduates. I may appear calm, I was not. Photo credit, my trusty guide Yaseen. X, sj

Now this isn’t something you see often. It’s like the blackberries are mating en route to Boston via @amtrak. It’s nice to see them having some fun for a change. X, sj

Thanks to my local branch Jefferson Market Library, I’ve now got my hands on this. Going to go climb a tree this weekend so no one can find me and just read. X, sj

A wonderful night. A fantastic date. A wonderful design team @monsemaison, hair @sergenormant , makeup @leslielopezmakeupartist, the eye of @erinwalshnyc and my trusted partner @alyssa and many memories. Wash face, brush teeth and try to fall asleep while images of trains and sequins dominate. The Met Ball 2016 out. X, sj #manusxmachina

For real! I swear. Never blase or cavalier about a moment like this. Cause, a moment later, it’s gone. Right? X, SJ

Almost there. Stuck in traffic. On 31st. Had time to change my shoes. Be there soon @bloomingdales! X, Sj

See that look in my eyes? It’s what I know we all feel about @billyeichner… So there I was, standing side by side with him, getting yelled at by him (oh the joy) running the streets of NYC with him, a dream come true. And all captured on film. Or a teeny digital card. Point is, apparently it’s hitting the “airwaves” and you can watch me be his obedient guest and devoted fan. Thursday, December 17th at 10:30p on @TruTV. If you want. X, SJ

Previous post:
Clinton Crushes Trump In Epic 30-Minute Speech That Just Guaranteed Her The Keys To The Oval Office Next Post:
Four Tet Manages To Upload His A+ Remix Of Tangents’ “Jindabyne” Despite Being Hassled By Soundcloud