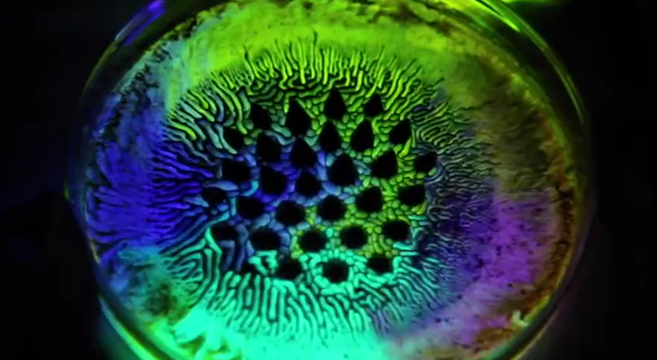 Ferrofluid (i.e. ferromagnetic + fluid) is a liquid that becomes hyper-magnetized when it’s near a magnetic field. Created in 1963 by NASA, Wikipedia explains that ferrofluid was originally invented as a rocket fuel that could be “drawn toward a pump inlet in a weightless environment by applying a magnetic field.” But you don’t have to be a rocket scientist to be curious about what would happen if you mixed ferrofluid with the liquid from a glowstick. That’s exactly what the folks at PBS Digital Studios wanted to know, and you can see what happened in their ferrolicious video below. I’ve also attached PBS Digital Studios’ recipe for glow-in-the-dark slime below, as well as the extraordinary work of artist Kim Pimmel who combined ferrofluid with soap bubbles!
.

Previous post:
Your Daily Cuteness Quota: This Heated Weather Debate Between 3 Kids Over Sprinkling vs. Raining Next Post:
Watch Charlie Rose’s Fascinating Talk With Artist Taryn Simon On “Paperwork & The Will Of Capital”