After four decades as a reporter, Lesley Stahl’s most vivid and transformative experience of her life was not covering the White House, interviewing heads of state, or researching stories at 60 Minutes. It was becoming a grandmother. She was hit with a jolt of joy so intense and unexpected, she wanted to “investigate” it — as though it were a news flash. And so, using her 60 Minutes skills, she explored how grandmothering changes a woman’s life, interviewing friends like Whoopi Goldberg, colleagues like Diane Sawyer (and grandfathers, including Tom Brokaw), as well as the proverbial woman next door. Stahl’s research comes in the form of her brand new book, Becoming Grandma, published by Blue Rider Press and available on Amazon.

Along with these personal accounts, Stahl speaks with scientists and doctors about physiological changes that occur in women when they have grandchildren; anthropologists about why there are grandmothers, in evolutionary terms; and psychiatrists about the therapeutic effects of grandchildren on both grandmothers and grandfathers. Throughout Becoming Grandma, Stahl shares stories about her own life with granddaughters Jordan and Chloe, about how her relationship with her daughter, Taylor, has changed, and about how being a grandfather has affected her husband, Aaron. In an era when baby boomers are becoming grandparents in droves and when young parents need all the help they can get raising their children, Stahl’s book is a timely and affecting read that redefines a cherished relationship.

In an article for AARP, Stahl writes, “When it was finally my turn, I felt I was growing a whole new chamber in my heart. I nearly swooned, staring at her like a lover. I’d never seen anything so delicate and beautiful, so sweet, every feature perfect. And it’s not that I didn’t see her three chins. This is what I didn’t expect. I was at a time in my life where I’d assumed I had already had my best day, my tallest high. But now I was overwhelmed with euphoria. Why was she hitting with such a force? What explains this joy, this grandmother elation that is a new kind of love? But there was something more at work here, something mysterious welling up inside me. It wasn’t that I hadn’t been told that becoming a grandmother was the best thing that ever happens to a woman. But what I couldn’t get over was the physicality of my feelings. When I got into bed at night, I would pretend I was holding Jordan in my arms. I was infatuated. Dare I say it? It felt like…ardor. Aha! There it was. We grandmas literally, actually, fall in love.” You can read the full article at AARP, get your own copy of her book Becoming Grandma on Amazon, and watch her CBS Sunday Morning report above. (Photo credit: Dave Lauridsen) 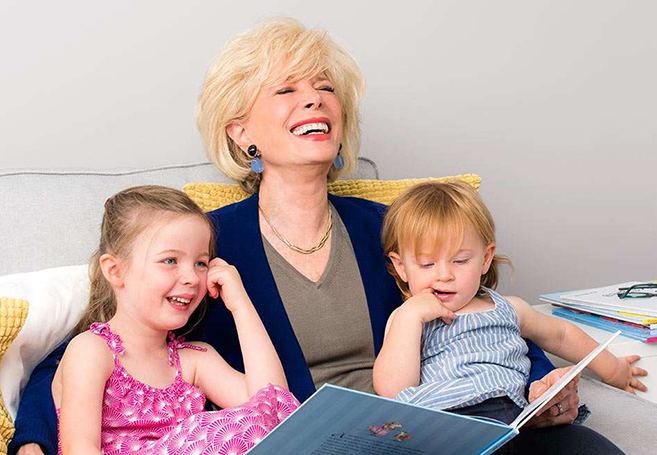