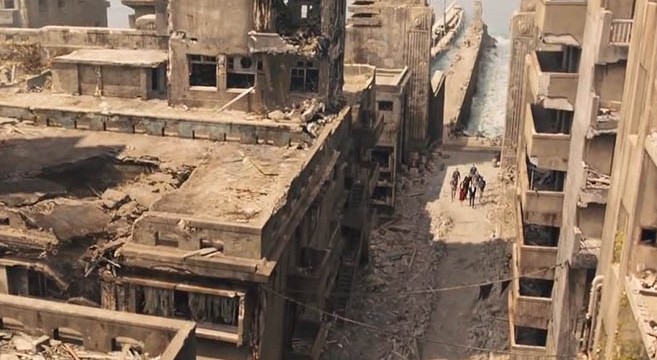 Check Out This Video Tour From That Creepy, Post-Apocalyptic Japanese Island From “SKYFALL”

Hashima Island, also known as Gunkanjima (“Battleship Island”), is an abandoned island located 9 miles (15km) southwest of Nagasaki at the very bottom of Japan (Google Map). It’s one of 505 uninhabited islands in the Nagasaki Prefecture, and is famous for its dilapidated concrete buildings as well as its dark history of being a site of forced labor before and during WWII. Prior to that in the late 1800s the 16-acre island began its undersea coal mining operation, and by 1959 the island reached its peak population of 5,259 people. Soon after, however, the coal mines were depleted and everyone left. For three decades the island was completely deserted, but in the 2000s it became popular for its ruins. Tourism was officially opened to the island in April 2009, and in July 2015 Hashima Island was designated a UNESCO World Heritage site — in large part due to the global attention it received when it appeared in the 2012 James Bond film SKYFALL. (Photo courtesy of MGM)