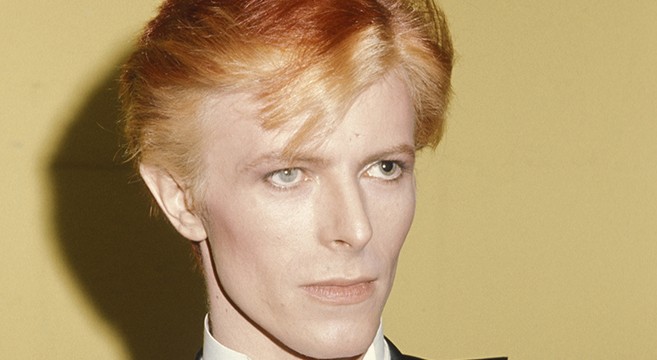 The news of David Bowie‘s death this week hit us like a punch in the gut. Besides his closest friends and family, no one had a clue he was battling cancer. On January 8, 2016 he released his final album, Blackstar, and two days later he passed away at the age of 69. The initial reviews of the album were strong enough, but in the wake of his death the album has taken on an entirely new meaning. In a feature written for Motherboard entitled David Bowie’s Death Itself Was A Science Fiction Masterpiece, Brian Merchant writes: “From his first hit, ‘Space Oddity,’ to his breakthrough as Ziggy Stardust, to his final act as Lazarus on his last album, Blackstar, Bowie wasn’t just performing this mode of personalized science fiction, he was living it. Right up until the end. He dropped the ‘Lazarus’ video, a companion piece to the sci-fi epic Blackstar, in which he inhabits a world of dead astronauts, scarecrow mutants, and eternal candles, with the album, three days before he died. It is about a man, played by David Bowie, who levitates on his deathbed.”

Bowie was a man of many talents, and in a terrific interview with Charlie Rose he explains why he never considered himself much of a musician. He identified more as a “jack of all [artistic] trades,” he says. You can watch it in full below. Two of those trades were acting and comedy — both of which come together at their very best in a sketch he did with his close friend, Ricky Gervais, entitled “Little Fat Man”. You can watch the side-splitting amazingness in the video below.

I also came across a fascinating article this morning published by New York Magazine‘s Science of Us in which Tanya Basu explains the fascinating backstory behind David Bowie’s strange left eye. As it turns out, Bowie was not born with it — it came from a punch he took when he got in a fight over a girl. “As the story goes, Underwood wasn’t exactly pleased, and in fit of passion reportedly punched Bowie smack-dab in his left eye. ‘At first he [Underwood] thought I was kidding,’ Bowie recounted to Spitz. ‘It wasn’t a very hard punch but obviously caught me at a rather odd angle.’ Underwood’s fingernail had scratched the surface of Bowie’s eyeball, paralyzing the muscles that contract the iris.” You can read the full story at NYmagcom. (Photo by Ron Galella; Ltd./WireImage via Getty Images, Photo by Ron Galella,Ltd./WireImage via Getty Images)