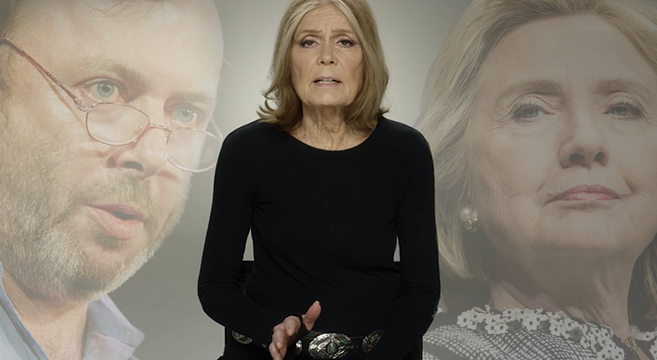 Hitchens & Steinem: “The Empowerment & Liberation Of Women Is The Only Cure For Poverty We Know”

Even five years after his death in December 2011, Christopher Hitchens remains one of the most important public intellectuals of our time. Thanks to his immortal words, interviews, and speeches, he continues to change the world for the better. The breadth of Hitchens’ passions was matched only by the depth of his powerful intellect, but one he held closest to his heart was his global championing of women’s rights. During this appearance at the 2010 Sydney Writers Festival, Hitchens elaborated on his belief that the empowerment and liberation of women is the only cure for poverty that we know.

It’s a belief shared by all giants in the fight for women’s rights, especially Gloria Steinem. In her recent appearance on Charlie Rose, where she was invited to discuss her new book Gloria Steinem: My Life On The Road, Steinem explains how the patriarchal control of the woman’s uterus has been at the heart of male-dominated power throughout world history. I’ve watched most of Charlie Rose’s interviews, but this is one of the single most important ones I have ever seen. You can watch a clip below, as well as the interview in its entirety.

Another powerful woman who is fighting for this change is a friend of mine who works for one of the world’s leading NGOs. She has traveled to some of the world’s most dangerous locations where the subjugation of women reaches its highest levels. In describing the complexity and severity of the challenge, she described to me one program her and her team developed for one country in particular which was designed to help improve agricultural productivity. Their initial strategy was: improve the agricultural productivity of the village, and the benefits would trickle down and help improve these women’s lives at the same time. After several months she paid a visit to the village to see the program’s progress first-hand and was shocked to find the fields were empty. It wasn’t until she began speaking with the local women that she understood why it was a flawed program. As it turns out, a higher yield of crops did more harm than good. The women in the village explained how when the crop yield increased, the only thing it resulted in was the men selling the crops for money, and in return these men were buying more brides. More crops = more subjugation. My friend and her team had to completely reassess the program and start from scratch.

Multiply that complexity on a global scale, and the weight of the challenge begins to come into view. In the most consequential presidential election in modern history, it is essential to weigh the risk of how a President Donald Trump would do nothing but contribute to the subjugation of women in villages such as this one. By electing Hillary Clinton as President, the symbolic power of that presidency would yield something much more beneficial than a higher yield of crops in impoverished nations. It would plant the seeds in the minds of these women and young girls that the time has finally come to rise up and take control of what is rightfully theirs.