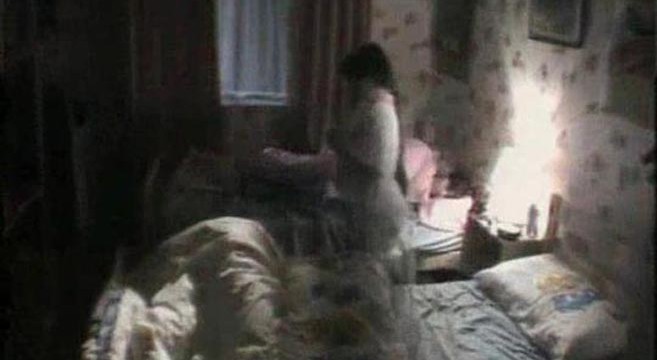 The world of televised paranormal investigations first began in the 1950s in the UK. Back then the shows took place in the most traditional of all haunted locations — old houses, stately homes, or ancient ruins. But in the 1970s the setting for these televised investigations began to change. Instead of old stone buildings, these hauntings and poltergeists began popping up in the suburbs. There were several reports of suburban hauntings that made national headlines in the UK in the 70s, but none of them were more famous or terrifying than the poltergeist that terrorized a small family in Enfield, England, in North London, at 284 Green Street between 1977-1980.

The home was rented to Peggy Hodgson, a single mother with four children. During this time furniture is said to have moved by itself, knockings on the walls were heard, and children’s toys were said to have been thrown around and to have been too hot to touch when picked up. A police officer signed an affidavit to affirm that she saw a chair move violently across the room. Reports of the activity attracted various visitors including mediums and members of the press. One photographer even reported being hit on the forehead with a flying object. After visiting the house, George Fallows, a senior reporter for the Daily Mirror, suggested that the Society for Psychical Research (SPR) be called in to investigate. The police officers and journalists who experienced the traumatic paranormal encounter all remain shaken by what they experienced. The Enfield Poltergeist remains the most famous case of poltergeist activity in the world, and in the years since, the events of that haunting have been recounted in several TV series and documentaries including: The Enfield Poltergeist (2008 documentary, watch in full below), the 2015 Sky Living television series The Enfield Haunting, and the 2016 theatrical film The Conjuring 2: The Enfield Poltergeist.

But on October 31, 1992 the BBC aired a live TV mockumentary entitled Ghostwatch, which was based loosely on the events that occurred in the Enfield case. Similar to what happened with Orson Welles’ 1933 radio broadcast of an alien invasion, War Of The Worlds, the live broadcast of Ghostwatch sparked mass hysteria across the UK. In a remarkable essay on the television history of paranormal investigations, Adam Curtis writes: “It was quite obvious from both the introduction and the titles that [Ghostwatch] was a work of fiction. But the reaction was astonishing — thousands of people rang in — either terrified or angry or to report that they were experiencing paranormal activity in their house at that very moment. The next day there was a media storm — and the BBC reacted in its normal courageous way by burying the programme and disowning it. The Radio Times was apparently told never to mention it ever again. And [Ghostwatch writer] Stephen Volk has described how it was like being airbrushed out of a photograph in Stalinist Russia. But the extraordinary reaction rather proved the central aim of the drama. It demonstrated the truth about modern television — that we all know that increasingly the line between fiction and non-fiction is blurred on TV. But far from making us distrust television this actually makes it more powerful. It possesses our imagination more powerfully precisely because we don’t know what is real and what is not.”

You can read Adam Curtis’s fascinating essay, “The Ghosts In The Living Room”, at BBC.co.uk, and watch a behind-the-scenes look at how the Ghostwatch phenomenon occurred in the video below. And if you have the courage you can also watch the disturbing documentary The Enfield Poltergeist in full below as well.