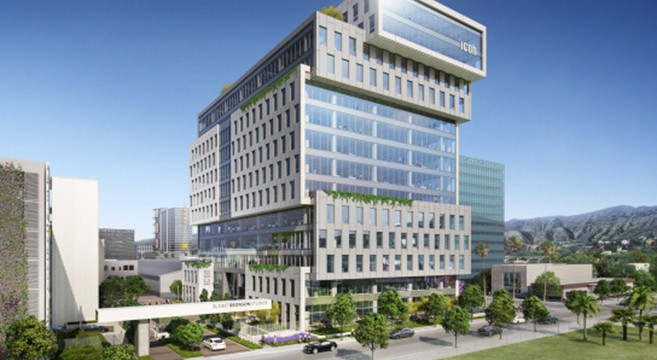 Netflix is getting its own Hollywood office, production, and sound stage facility — and a big one to say the least. The company is moving its production space to a huge new office tower at 5800 West Sunset Boulevard (Google Maps), having recently signed a longterm lease which will provide them with 200,000 sq.ft. of the 323,000 sq.ft., 14-storey ICON tower scheduled to be finished construction in late 2016.

In terms of square footage the deal is the largest of its kind in Hollywood history, and the building is also the site of Warner Brothers’ original studio where the first talking feature-length film, The Jazz Singer, was filmed in 1927. “ICON is a state-of-the-art facility that places Netflix squarely in the middle of Hollywood’s creative culture to support our next stage of growth and content creation,” said Netflix CFO David Wells. “The property’s combination of office, stage and production space provides an ideal setting.”

The tower will be the center of Netflix’s productions, while its headquarters will remain in Los Gatos, California. Netflix recently signed another major lease which will expand their Los Gatos offices to a massive 240,000 sq.ft. (Image courtesy of Hudson Pacific Properties)