Each and every year Oregon’s most mysterious lake — named “Lost Lake” — is drained 100% dry. The phenomenon always happens in April after the winter is over, and this time videographers with the Bend Bulletin captured the moment on video. The drain is actually a 6-foot diameter lava tube which collapsed ages ago when it cooled (lava tubes are prevalent in Oregon, and form naturally in volcanic areas as conduits to drain volcanos). When the winter ice melts, the water is sucked underground to an unknown aquifer below. “In Lost Lake, this particular lava tube collapsed and became the drain hole for that lake,” Jude McHugh, a spokeswoman for the Willamette National Forest, told ABC News. “The lake is likely constantly draining, she said, but its most evident in the drier months when the rate of draining exceeds the input from precipitation, turning the lake into a meadow.” But if you think that’s impressive, wait until you see what caused Louisiana’s Lake Peigneur to drain in 1980. Watch the mindblowing story below to find out how one man’s simple mistake caused the largest man-made vortex in human history. 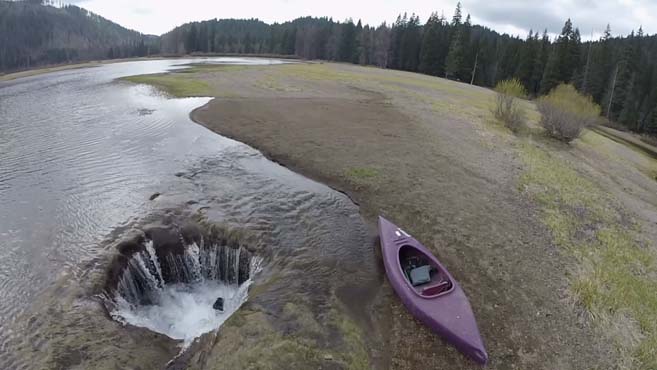