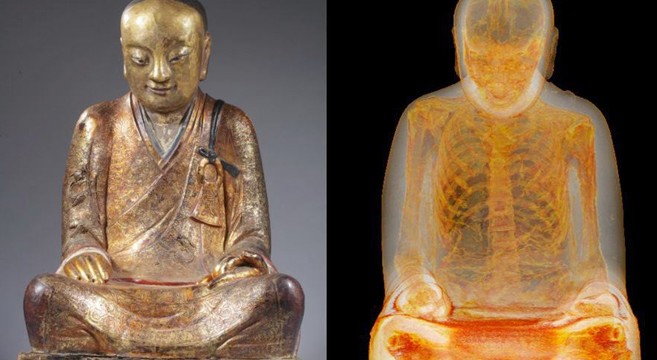 Scientists and staff at the Meander Medical Center in the Netherlands have found the mummified body of a 1,000-year-old Chinese Buddhist monk inside a Buddha statue which is dated between the years 1050-1150 AD. Experts explain the monk had practiced the ancient tradition of self-mummification, a devout practice wherein Buddhist purists would starve themselves for a decade and eventually meditate to the point of death. In this tradition these monks are revered as “living Buddhas.” The mummy of Buddhist master Liuquan was revealed using a CT scanner, and both Liuquan and the statue are currently on display at the Hungarian History Museum in Budapest. Endoscope samples from Liuquan’s chest and abdomen found scraps of paper with ancient Chinese writing and other unidentified items inside contained within. (Photos courtesy of Drents Museum and the Meander Medical Center). 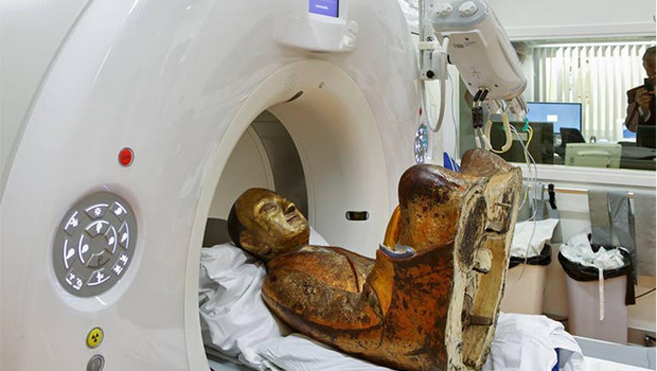 Previous post:
Once You Watch This Video Of An Artist Dripping Paint Over A Cube You’ll Want To Try It Yourself Next Post:
The Fascinating True Story Behind Joy Division’s Mysterious Album Cover For “Unknown Pleasures”