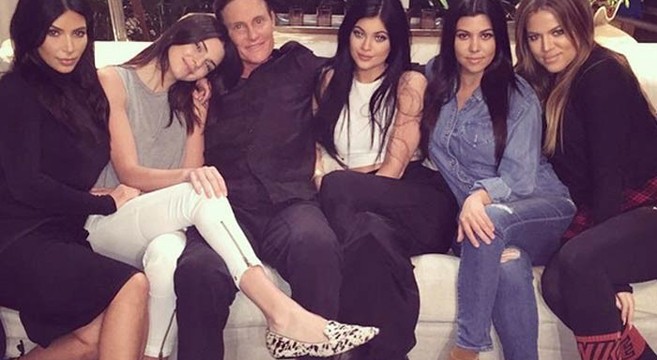 The Kardashian-Jenner family is on the verge of what insiders are describing as one of the most potentially groundbreaking reality series in television history. For a few years now, viewers have been wondering about what patriarch Bruce Jenner has been up to, with his ever-lengthening nails and hair, and his physical appearance in general. Now TIME magazine is confirming that Jenner is about to go public with his journey into womanhood, and it will be broadcast in a brand new series on the E! network.

“Bruce is transitioning to a woman,” says a source close to the family in an interview with People. “He is finally happy and his family is accepting of what he’s doing. He’s in such a great space. That’s why it’s the perfect time to do something like this. He’s being very smart about and also respectful about his transition,” the insider says. “Instead of completely shocking everyone, his changes have been subtle, and his family has had the chance to slowly get used to his new looks and life. The [kids’] concern seems to be Bruce’s happiness, and he acts very pleased with his new life,” says the insider.

In a recent interview with Entertainment Tonight, stepdaughter Kim Kardashian said, “I think everyone goes through things in life, and I think that story and what Bruce is going through, I think he’ll share whenever the time is right.” Kardashian adds, “He’s the happiest I’ve ever seen him!” You can read the full story at People.com. To learn more about exactly how and why the series could be so groundbreaking for the transgender community you can visit Salon.com.

One person who will most definitely be watching is diehard Keeping Up With The Kardashians fan Jennifer Lawrence. VANITY FAIR tells the story of how the Oscar-winning actress and KUWTK superfan recently had a meltdown when she ran into Kim Kardashian in a hotel lobby. You can get the full scoop at VANITYFAIR.com. You can also watch Kim’s appearance on Entertainment Tonight below where she discusses her dad’s journey.

For years I had relatively no idea what KUWTK was all about, until this past Christmas when I watched an entire marathon of more than 100 hours’ worth of the series. I’m not even joking — I was instantly hooked. Then I took it to the next level by gorging myself on the other marathons of the show’s spin-offs Kourtney and Khloé Take Miami, Kourtney and Kim Take New York, Kourtney and Khloe Take Miami, and Kourtney & Khloe Take the Hamptons. I’m an unabashed KUWTK megafan, and will definitely be tuning in for season 10 when it premieres in spring 2015 (new episodes began filming in October 2014).