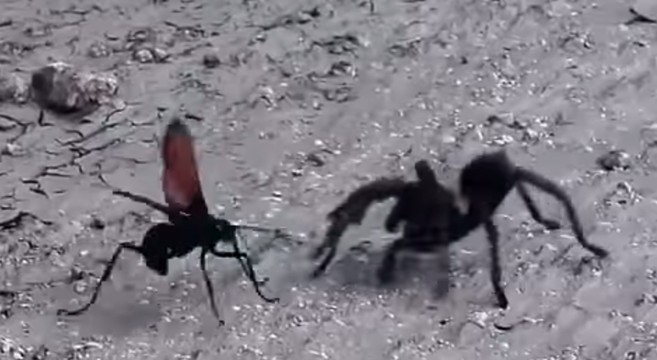 I almost never have nightmares — let alone ones involving animals. So the fact that I watched the wasp-tarantula video below yesterday afternoon, then proceeded to have a nightmare later that night involving a boa constrictor, is probably not a coincidence. The video was taken in Arizona by a local resident, and it shows a “spider wasp” attacking a tarantula. Yeah, take a wild guess who wins. The wasp manages to flip the tarantula on its back, sting and paralyze it, drag it into the woods, where it eventually laid its eggs in the abdomen of the tarantula. Also known as a “tarantula hawk“, these wasps hunt and feed off tarantulas as a source of food for their larvae eggs. They grow an average of 2″ in length (5cm) and have bright blue-black bodies with rust-colored wings. Their long legs have hooked claws for grappling with their victims, and the stinger of a female can be up to 1/3” long (7mm) — a sting which is considered the second most painful insect sting in the world. The man who filmed the encounter writes: “I came across these two giants fighting in a desert wash in Arizona a few hours after a rain while looking for rattlesnakes. I’ve seen this a few times, but have never been able to film it.” And if that’s not enough to cause nightmares, then you can check out this gallery of photos which will send a chill up your spine by CLICKING HERE.

Previous post:
“Of Course!”: Watch This One-Hour Supercut Of Angela Lansbury’s Epiphanies From “Murder She Wrote” Next Post:
Video Shows World’s First Twitching Muscle Fiber Ever Grown In A Laboratory