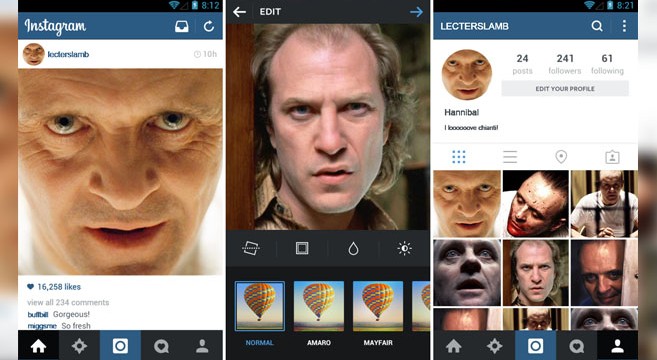 No one can say for certain if our social media culture has reached “peak selfie” — but we can hope.  Alongside bullying and “like-seeking”, selfie culture is one of the most disturbing aspects of the social media era.  Now researchers at Ohio State University’s School of Communication have discovered an even more disconcerting dimension of Instagram’s pandora’s box of darkness.  In a study of 800 men between the ages of 18-40, a pattern known as the “Dark Triad” emerged, composed of three elements in varying degrees depending on the individual: narcissism, self-objectification, and the most dangerous of all — psychopathy.

The results of the study were recently published in the journal Personality and Individual Differences, and the research measured three interesting metrics: 1) time spent on social networks (SNSs), 2) number of selfies posted, and 3) amount of time spent editing photographs of oneself posted on SNSs.  The data collected from the participants showed the following among the three metrics: 1) the more time spent on SNSs equated to higher rates of self-objectification and narcissism; 2) the more selfies posted by an individual equated to higher rates of narcissism and psychopathy; and 3) the more time spent editing photos of oneself before posting them (i.e. cropping, filtering, software manipulation of photos) equated to higher levels of narcissism and self-objectification.

“Narcissism is marked by a belief that you’re smarter, more attractive and better than others, but with some underlying insecurity,” writes Jeff Grabmeier on Ohio State University’s news site. “Psychopathy involves a lack of empathy and regard for others and a tendency toward impulsive behavior,” and self-objectification is defined as when we choose to evaluate ourselves based on appearance because that’s how we believe others adjudicate us.  Grabmeier adds: “While this study didn’t include women, [the researchers say they are] currently conducting follow-up work that suggests the same findings found in this research also apply to women.  Women who post more selfies also show higher levels of narcissism and psychopathy.  However, self-objectification plays a larger role with women.”

So how do you know if a selfie-obsessed man is a psychopath?  “Psychopathy is characterized by impulsivity.  [These guys] are going to snap the photos and put them online right away.  They want to see themselves.  They don’t want to spend time editing,” says Jesse Fox, the lead researcher of the study.  Furthermore, the psychopathic selfie lovers also exhibited higher tendencies of asking random people on the street if “The lambs have stopped screaming?”, as well as telling others to “Put the lotion in the basket!”

SEE ALSO: The Challenge Of Aging In A Narcissistic World
SEE ALSO: I Just Deleted My Facebook & Instagram Accounts And Feel Like A New Man
SEE ALSO: Kirsten Dunst Stars In New Short Film Highlighting The Lunacy & Narcissism Of Selfie Culture
SEE ALSO: The Vemödalen Instagram Paradox Explained: This Is That Weird Feeling You Get When You Take Photos
SEE ALSO: 20 Amazing Facts About “The Silence Of The Lambs”: From Buffalo Bill’s Pit At GE, To Kubrick’s HAL, To Dali’s Skull

Previous post:
LINKguide (January 9, 2015) Next Post:
Listen To NPR’s Fascinating Story About Martin Pistorius, A Man Trapped In His Body For 12 Years