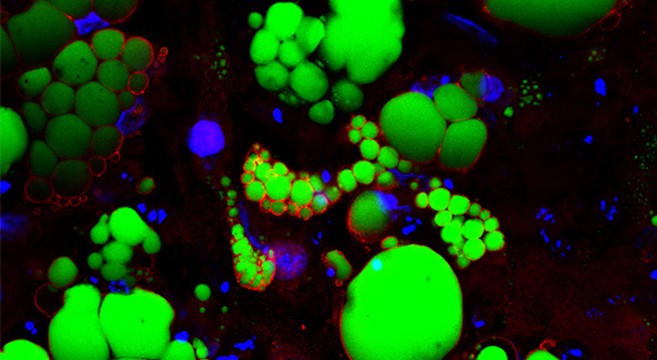 The human body has two types of fat cells: 1) white fat cells which store excess energy and lead to those annoying extra pounds, and 2) brown fat cells which actually burn excess energy and help you to lose weight.  Now researchers at Harvard have discovered a brilliant method in which to trick your lazy white fat cells into thinking they’re your hardworking, fat-burning brown fat cells. Researchers with the Harvard Stem Cell Institute recently published their results in the journal NATURE, and the following is an excerpt:

“The rising incidence of obesity and related disorders such as diabetes and heart disease has focused considerable attention on the discovery of novel therapeutics. One promising approach has been to increase the number or activity of brown-like adipocytes in white adipose depots, as this has been shown to prevent diet-induced obesity and reduce the incidence and severity of type 2 diabetes. Thus, the conversion of fat-storing cells into metabolically active thermogenic cells has become an appealing therapeutic strategy to combat obesity. Here, we report a screening platform for the identification of small molecules capable of promoting a white-to-brown metabolic conversion in human adipocytes. We identified two inhibitors of Janus Kinase (JAK) activity with no precedent in adipose tissue biology that permanently confer brown-like metabolic activity to white adipocytes. Importantly, these metabolically converted adipocytes exhibit elevated UCP1 expression and increased mitochondrial activity. We further found that repression of interferon signalling and activation of hedgehog signalling in JAK-inactivated adipocytes contributes to the metabolic conversion observed in these cells. Our findings highlight a novel role for the JAK/STAT pathway in the control of adipocyte function and establish a platform to identify compounds for the treatment of obesity.”

The researchers believe they are a few short years away from creating a pill which can hack your white fat cells in the process explained above.  One of the biggest challenges the team faces is the fact that the compound they discovered which tricks the white fat cells also significantly suppresses the immune system.  They hope to rework the compound so the final pill won’t weaken your immune system and make you sick.  You can read the full story by visiting Harvard University.  The Harvard Stem Cell Institute has made several other fascinating discoveries in how to reprogram cells — such as a recent breakthrough in treating diabetes — and you can read more by visiting the Harvard Stem Cell Institute. (Photo credit Tim Ahfeldt/Harvard University).