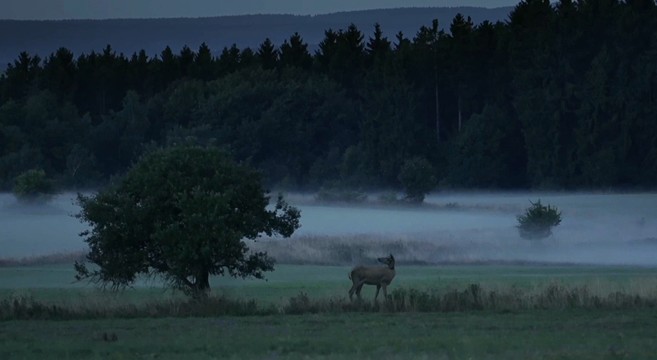 In science, the term “observer effect” refers to changes that the act of observation will make on a phenomenon being observed.  This is often the result of instruments that, by necessity, alter the state of what they measure in some manner.  A commonplace example is checking the pressure in an automobile tire; this is difficult to do without letting out some of the air, thus changing the pressure.  The same can be said for nature photography which is in many ways completely manufactured by means of camouflaged hideouts, staged lighting, baiting techniques, etc.  This idea is explored in a gorgeous new short film entitled Still Life from filmmakers Florian Fischer and Johannes Krell.

The pair filmed in Harz National Park in Germany, and their concept was inspired by the traditional nature documentary format, mixed with their hunt for compositions and locations reminiscent of natural history museum dioramas.  “The Blauer See is a disused lime works where a lake accrues every spring,” directors Fischer and Krell tell NOWNESS.  “Through the limestone the water looks extremely artificial, almost as if it was in the Caribbean, but the surrounding trees make it a European setting. We were looking for that kind of contrast.  Nature documentaries often try to be authentic and real, but they’re created out of complex staged settings where the viewer feels unnoticed by the animals.  We broke this convention by making animals and nature counterparts, so not only are we looking at nature—it’s looking back at us.”

The synopis of the film reads as follows: “Still Life is a nature film for the modern world. Hauntingly beautiful imagery of natural and artificial scenes (i.e. snowy white owls juxtaposed with taxidermy hares) challenges our idea of the classic nature film. It allows us to question our idea of what’s real, what isn’t, and even our understanding of nature itself.”  To learn more about the film be sure to visit their website at Still-Life-Film.de.