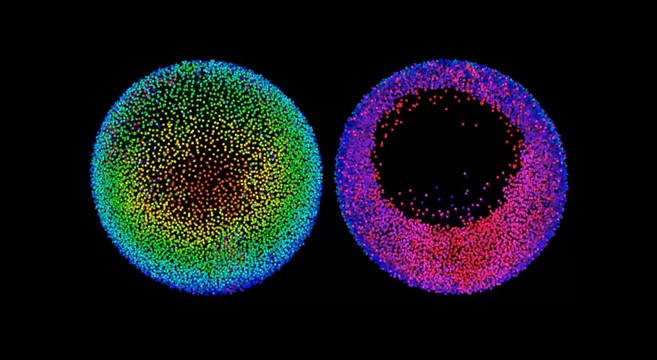 The New York Times has written a fascinating piece on some new software created by the team at Janelia Farm, a Virginia research campus of the Howard Hughes Medical Institute.  The powerful software has the ability to track each and every cell in a developing embryo.  The resulting kaleidoscopic animations are not only beautiful, they are also providing groundbreaking insight into the complexities of embryo formation by offering sources of data on the path of each cell — in what’s known as “fate mapping”.  You can read the full story by visiting NYTimes.com and by watching the video below.  The animation reminded me of some similar research I had come across on Kottke earlier this week involving the physics of mosh pit formation.  The research was conducted by the team at the Itai Cohen Group, and published by Cornell University in a paper entitled “The Collective Motion of Moshers at Heavy Metal Concerts“. You can watch the mosh pit animation below, and be sure to play with the interactive feature which allows you to tinker with the scale.