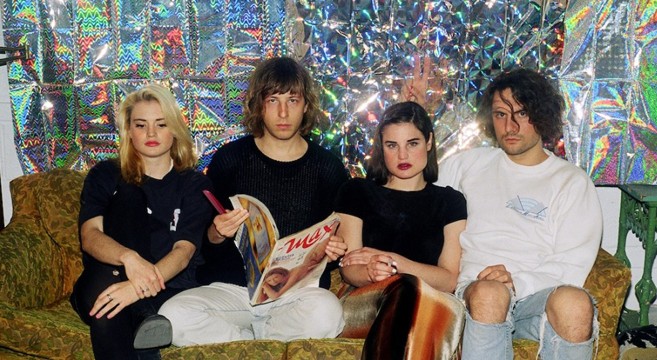 One of my favorite things in the world is to head out into the streets of Montreal and walk for hours and hours and hours.  The city is a paradise for a flaneur like me, made all the better when I’m listening to a great new album.  It just so happens that yesterday my soundtrack for those several hours was the new album from Montreal indie pop masters TOPS.  The band’s sophomore album Picture You Staring was released just over a month ago, and they are seriously about to take the world by storm.  I couldn’t get enough of this album yesterday, and highly recommend it as a perfect accompaniment to the crisp fall days and nights that await us around the corner.

I also just learned that fellow Montreal musician, Mac DeMarco, makes a brief cameo in TOPS’ brand new video for “Way To Be Loved” — as does one of his testicles at the 1:47 mark (the rest is conveniently tucked inside his pants LOL).  You can grab your own copy of TOPS’ new album Picture You Staring via iTunes.  You can also follow TOPS on Facebook, visit their mothership at TTTOPSSS.com, and read their bio at their home label Arbutus Records.  You can also check out TOPS’ brand new video for “Outside” which was just released yesterday.

Along the same vibe as TOPS is a great New York Times Magazine feature that popped up a couple of days ago wherein the NYT team helped organize a meetup between L.A.’s all-sister band HAIM and legendary Stevie Nicks — inside Stevie’s home!  You can read the full story entitled “Sisters Of The Moon: Stevie Nicks and Haim” by visiting NYTimes.com.  And although the recording quality is poor, listen below as Stevie Nicks and the HAIM sisters perform a rendition of Fleetwood Mac’s “Rhiannon” that would make any fan of these women melt into a puddle.  (Photo courtesy of Rebecca Storm).

For a full list of TOPS dates on their North American tour happening right now CLICK HERE (NOTE: Mac DeMarco’s testicle has not confirmed its appearance at any of these events).