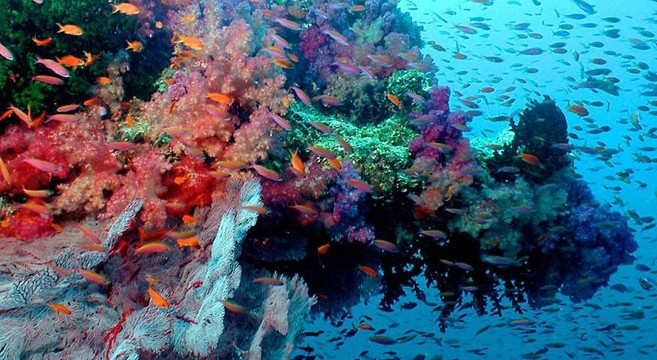 Coral reefs are colonies of “coral heads” which are living polyps that are genetically identical.  They can kill plankton for food, and defend themselves if necessary.  The calcium carbonate they produce throughout their lives becomes a colorful, growing external skeleton on which they sit.  Over time these calcified deposits can grow to enormous sizes, creating coral reef ecosystems which can harbor over 4,000 species of fish and other marine life forms.  In recent years scientists have begun to unlock the mysteries of how coral survives.  For example, inside the bodies of each coral are highly productive algae.  The algae combine carbon in the water and energy from the sun to produce photosynthesis, and the algae give 95% of this energy back to the coral.  In return, the algae gets vital nitrogen to keep going.  The symbiotic relationship depends on a delicate communication process between the algae and the coral, with the algae constantly communicating to the coral that it belongs there — a “don’t worry, be happy” message.  Otherwise the coral would attack and kill it in much the same way as a parasite or invader.

Earlier this week a brand new discovery was made which revealed another of coral’s sophisticated communication systems — this time with fish.  If and when the algae growth starts to get out of hand, the coral will place a call to their favorite little saviors — the gobi fish.  The “distress call” chemical that coral releases in this situation attracts the gobi fish who will eat exactly as much of the algae as the coral wants.  The discovery was recently published in the journal Science, and gives disturbing proof of what happens when overfishing occurs near coral reefs.  In protected areas where there is no fishing, the coral reefs are doing well.  In areas where there is overfishing, however, the coral reefs are dying.  The coral-gobi communication was discovered by researchers at Georgia Tech.  Mark Hay is one of the GT researchers who describes it as “the coral reef death spiral.”  Hay discussed the situation in an interview with PRI: “Everything that’s going on — global warming, overfishing, pollution — means there’s less coral, more algae and more contact between corals and algae.”  Sadly, the death of a coral reef can happen incredibly fast — within 48 hours.  “Those corals … start bleaching and tissues start dying where they’re in contact,” he says.  “And then on a couple of those corals, that bleaching just spreads [to] the rest of the coral.”

To learn more about coral-algae communication be sure to visit NSF.org.  And to learn more about coral-fish communication you can visit PRI.org.  It’s estimated that 20% of the world’s coral reefs have died, with 25% threatened with death in the near future.  As the ocean’s temperatures begin to warm and acidify it is expected that coral reefs’ skeleton-building calcification rates will be reduced by 50% which will promote further dissolving.